Seems the Current TV documentary on 'Missionaries of Hate' has generated lots of mention of Ssempa, and Uganda.

Understandable. Nothing is so flabbergasting as a 'man of god' going on a hate trip for all the world to see. In the name of god of course. The videos are going viral, I think. Ssempa will love it. Well, I mean, he will love the fact that the world is seeing what he is, and what he thinks, believes, says, and they dont have to look use gug as the microphone...!

Ssempa...
Well, the gentleman is still doing his thing. He is still doing an anti-gay crusade. But, there is a twist these days. He wants to join with the Moslems. And, I am not kidding you at all.

Remember, this is not a new thing with him. He has been trying to do it for some time. Formed another of those ubiquitous organisations of his. Anyway, about a couple of weeks ago, some leaders of the Moslem faith in Uganda sent out this letter of invitation to an Anti-Gay Event in Kampala. 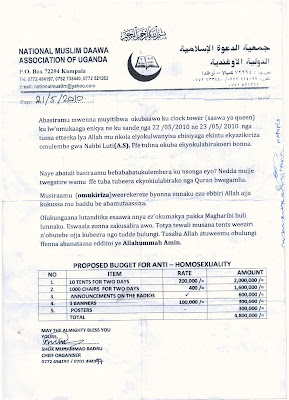 The letter is mostly in Luganda. Language spoken by most commonly in Central.

I have attempted a translation.... Which I unashamedly request Afrogay to help perfect if you can! Anyway, here is my translation of the letter.


All Moslems are invited to Clock Tower on tomorrow Saturday and Sunday 22 and 23rd May 2010 as we put Allah’s Law into action fighting homosexuality something that destroyed the world in the days of the Prophet Lot. We have to be the example to all.

But, is it true that those who are not Moslems are leading in this work? Come and we be together, so that we are the example as the Quaran says we should be.

Any Moslem, (Believer), leave or sacrifice your time for those two days and God (Allah) will reward you for being one of those who have done something for him.

The meeting will start at 10:00am until late both days. All the prayers will be held there. There will be seating provided, and tents, shade from the sun. We pray to God (Allah) for all those who will defend God’s Religion.

(beneath was a table of the budget, and the letter was signed by Sheikh Muhammad Badru and the letter head is the National Muslim Daawa Association of Uganda)

Well, the meeting was held. And suprise, suprise, despite the fact that it was to people of the faith, Muslims, a few prominent kaffirs or unbelievers attended to join hands, Christians and Moslems in this very important Crusade/Jihad to be.

The attendance was not as huge as at some of the anti-gay rallies that Ssempa held earlier in the year. But, he was there, and spoke, I am told. Here is a report of the same. I think the title should be 'Sheikhs Launch anti-homosexuality Campaign.'

So, what else is new in that?

Well, potentially, our Muslim brethren insisting on Quaranic purity for us may mean that they may decide it is okay, sanctioned for gay Ugandans to be lynched. Killed. and that out of hand.

I have heard rumours that some of the Tabliqs, a sect of the moslems here, have been drawing up lists of us gays. But again, those are rumours.

Anyway, it is something to note. The war is still on. A lull may have occured. But, it is not likely to last.