Imagine, meeting someone that you synch with. For the moment or forever. You going back home, in a place that is safe for you, and for him. And you making love.

And, your neighbours, who have 'long suspected' that you are gay, breaking down the door, so that they can catch you making love. So that you can be shamed, and punished, for making love to another, your lover.

And your community going gaga about it. And you being paraded, and shamed, and brought to court, and convicted...., of lashes. Caned in public. All for the sin of loving another human being.

That is what this couple in Aceh, Indonesia are guilty of, and will be punished for.


The couple was arrested in late March after neighborhood vigilantes in the provincial capital, Banda Aceh, suspected them of being gay and broke into their rented room to catch them having sex. Cellphone video that circulated online and formed part of the evidence shows one of the men naked and visibly distressed as he apparently calls for help on his cellphone. The second man is repeatedly pushed by another man who is preventing the couple from leaving the room.


the men, aged 20 and 23, would each receive 85 lashes for having sexual relations. One of the men wept as his sentence was read out and pleaded for leniency.


It is ridiculous and tear jerking. In that hole, you wonder whether it could have been okay to know that you are gay, and different, that you love others, men, not women. Not that you want to rape them. But, you want to hold them in your hands, and tell them that they are beautiful, and want to touch, skin to skin, and breath in their breath, and touch their tongue with your tongue, and go into that total consummation of love, that is sex and the orgasm.

Is a moment when you can doubt yourself, doubt all that you are. 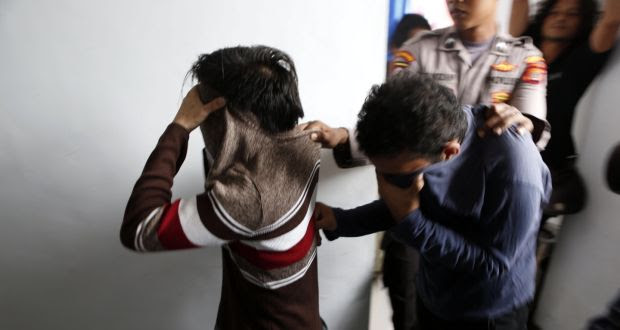 But that is what your people, your neighbors, family, people that you love, are condemning you to.

Isnt it unreasonable that we can hate ourselves, and think that we are liars and worse than that, that instead of coming out and braving the ostracism and castout status, we would hide and live a life of lies?

That is this gay life. Completely personal and ruthless in its ability to sway us and convince us of our simple stupidity.


“The verdict will increase fear among LGBT [lesbian, gay, bisexual and transgender] people not only in Aceh but also in many other, especially conservative provinces . . . in Indonesia,” said the organisation’s Andreas Harsono.


Is a brave person that stands up and says, no. We are not that. That we can beat that. And, more than that, we can shorten and beat all that the world throws at us.

Because, we too, are human beings.

This gay life can be tough and rough, not least of all because those who matter to us most are the ones who can reject us more than the others.

The LA times distills this report written for the International Lesbian, Gay, Bisexual, Trans and Intersex Assn. Its big, a pdf, and, well, sometimes we the lazy, or with the great excuse of information overload in this day and age can just scan...., so, the LAtimes summary does for us what we need...!

122:  The number of countries that allow homosexual acts between consenting adults.

72:  The number of countries that outlaw it (same sex intercourse).

25:  The number of countries where it is forbidden to form, establish or register a nongovernmental organization that focus on issues related to sexual orientation or LGBTQ rights. Almost two dozen other countries have laws aimed at curtailing public expression and promotion of being LGBTQ through social media or other means.


23:  The number of countries that allow same-sex marriage

26:  The number of countries that allow same-sex couples to adopt children that are not biological offspring of one of the partners.


9:  The number of countries, that specifically mention sexual orientation in their constitution as grounds for protection against discrimination.


Definite case of the glass being half full.

where we are coming from..., the whole world was a place that we hadnt thought livable. Now, due to the sacrifices, sweat and toil of many, queer and not so, we are at this point in time. With distinct gains to point at, but also some horrifying statistics and stories, like the gay pogrom in Chechnya now current.

So, what do we make of this?

As queer Ugandans say, Aluta Continua. The struggle indeed goes on. And, it is an interesting one to be part of.

Indeed, freedom is precious, especially to those aware of the price it demands.
Yet bondage, mental or physical, real or implied, a cage of the mind or for the body, is so onerous a condition that we indeed fight on, for nothing other than to be accepted as queer human beings.

Reminder to One's Self

I write because I love to do it.

To vent, to shout, to toss of some restless energy that is within me, demanding that somehow, somewhere, I can pour it off somehow. And that, in the big, hollow all-sucking black hole that is the cyber space, it might sink or float, whatever the case maybe.

Yes, of course I do want it to float, because sometimes the things that I write about matter a lot, life or death issues, but the therapeutic effect of the writing to me is part of why I write. And even when it sinks into the very void of the black hole, I, at least have unburdened myself. At least a little bit.

And, with time, I can also learn to do much more than write. Because writing demands of us a bit more. Having a temper and burning anger to write also demands that you pose answers as well as the questions, presenting a point of view, radical or conservative, but some answers to the questions that I ask of others and the wild, wide world that I live in. Because, I am a human being. More or less, I am that.

I also write to keep my hand in the morass and pie that is our world. Sometimes we forget, we all live in a cocoon. And, in the pursuit of life and livelihood, we miss the wider world out there. So, I look things up, and get amazed, or happy, or angered and cold. But, I break out of the cocoon of my existence, and open my eyes to the wide world around me.

That in itself is a great incentive. To break through the walls of the tunnel that I have all around me, the necessities, the urgent, breaking bad things. And also the need to rest and be confortable, the ability to get past my 'confort zone' to a place of unreliable, swinging winds. That, that's also why I write.

And, to deny myself of this positive pleasure on the excuse of being too busy, or too sick, or too old, or too bushed....., that is an excuse that I have leaned upon too much.

The reed is broken. It stabbed me in the hand, and the wound is weeping for now.
But, that is nothing for me to cry home about. That wound will heal. And, more than just healing, the scar will be a reminder of the many things that complacency can drag us down into.

As my people, queer Africans and queer Ugandans say,