Stigma is the Enemy; 2

I have been slow to return to this.

Meant to..., too important a chain of thought, though it was broken. But, it could return, could be renewed, could be..., done something about.

So, posted about SAs beautiful legal system for #QueerSouthAfricans which rivals none on the continent. It is really wonderful, flawed..., but wonderful.

If indeed the law was all that we had to get things right for queer Africans, #GaySouthAfricans would be in heaven.
But, they simply are not.

The vast majority of them live in real fear of death. I dare you to read the article extracts below.


NPA secured a 17 year jail sentence for a Ceres man who beat and set alight a gay man who asked to have sex with him.

Judge Siraj Desai labelled the murder of Dawid Olyne a hate crime, and asked that the docket be kept open to find the others who were part of the brutal attack on him, the NPA said in a statement.

Olyne was assaulted, strangled, tortured, tied up, and set alight, after the heterosexual Christo Oncke took offence at being hit on by another man.

No, not the work of a single person.

One person was apprehended, someone with mental challenges. The others who were not mentally challenged are free. Quite highly likely members of the same community, and Olyne knew them.

That is the day to day lived reality of many black south Africans. An exhilarating freedom, in places and spaces where you can be free, coupled by the very real reality that you might make that crucial pass at the wrong person, wrong time, wrong place......

The law managed to have one of the torture murderers arrested, charged, convicted. Which is a good thing.

And that fear is not only by Gay men. Lesbian South Africans in the townships are open at risk. This happened in the past week. (Pic from Facebook, via Mambaonline 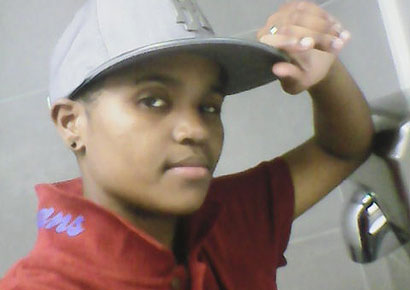 The Cape Times reported that on Saturday night, neighbours were awoken by Swelindawo’s partner, Nqabisa Mkatali, pleading for help.


She told them Swelindawo had been abducted from her home, which had its windows broken and the door kicked in. Swelindawo’s family and neighbours embarked on a desperate search for her throughout the night until they were told that her body had been found.--The body of 22-year-old Noluvo Swelindawo, known as Vovo, was found dumped next to the N2 highway near Khayelitsha on Sunday.

Unconfirmed reports say up to 11 men were involved in the attack on the house. At least one has been apprehended.

a man has now been arrested in connection with the 22-year-old’s killing. The man, believed to be from the same community, is alleged to be the main perpetrator in the murder.

Gay South Africans know of the issues on the ground. They know, for a fact that great laws may not protect their lives. And the fear and danger does not go away, because the law man might not be around the night 'they' attack. So, Queer South Africans have gone on the ground, to change perceptions, to make sure the spirit of the Constitution and the law gets to where the people experience violence. To make neighbor live with neighbor in harmony, be one straight and the other LGBT.

activist Funeka Soldaat, from the group FreeGender Khayelitsha, said that news of Swelindawo’s murder had left her devastated.

She said that the recently published Hate Crimes Bill will not on its own make a major difference to the continued attacks against LGBTI people and that more interventions need to happen within communities.
“Structures like street committees and other structures must be aware of LGBTI individuals in the community,” Soldaat explained. “Public dialogues with those structures around issues of homophobia and hate crimes must happen.”

Mnukwa, however, is angry that the Driftsands community did not do more to protect Swelindawo and failed to come forward with the names of her alleged attackers, despite ongoing engagements.
“We have had countless community dialogues and awareness campaigns to educate people about LGBTI issues and tolerance. I felt protected in Driftsands,” he said. “For them to protect the identities of these men and not to come out and help her when she was screaming at night for help, I feel betrayed.”


The distraught but emboldened community is undeterred. They can murder us, but they cannot make us keep quiet. They will NOT make us keep quiet, because, with Stigma as the Enemy, Silence is death. A Call to action.


GaySA Radio, Africa’s only LGBTI radio station, has called for a Day of Outrage on Saturday (10 Dec) to protest against the brutal and senseless murder: “Express your outrage, speak about what can be done, engage family and friends, take action. Take over social media, your home, your neighbourhood, your community. Join the call that says NO MORE.

But, on the ground, stigma rears an ugly, unchanging, infuriatingly hateful and murderous head. Stigma is the real Enemy, and for us to make more inroads, we need to go there to the community, the community which heard Swelindawo's screams for help in the middle of the night as a group of men, members of the community, invaded her house and abducted and later killed her, a community which LGBT South AFricans had thought they had engaged and thought relatively safe, but didnt prove safe ultimately for Swelindawo.

Because Stigma is the Enemy, the battle in the law courts is hardly done.

The war must be won by boots on the ground and that painstakingly slowly. Because Stigma is the enemy.

Posted by gayuganda at 6:38 PM