I mean...., remember the serious guy Magufuli? He was elected President of the United Republic...., and after the election, he brought a very fresh vision to what was happening in the country.....

There was a time that the hashtag #whatwouldMagufulido was seriously trendy.....

Apparently, amongst the 'wasteful' things that the government found, was HIV programming for gay men, Tanzanians. And, apparently the first mention of a problem is in a very #Magufuli style.

I am not sure whether the announcement is jumbled...., or what, but it seems nonsensical. The Minister of Health of the republic actually says that gay men in Tanzania have more HIV than other men..., but then says that she has ordered that they no longer be given condoms and lube....! Yes. That is what she says. It is as if she is a Minister of Religion (or Ethics and Integrity, in Uganda) instead of a Minister of Health. Check here.

The Tanzanian government has banned imports and sales of sexual lubricants in its latest move targeting the gay community, officials say.

Health Minister Ummy Mwalimu justified the move on the grounds that the product encourages homosexuality, which is banned in the east African nation.

"It is true that the government has banned the importation and use of the jelly to curb the spread of HIV," the minister told local media on Tuesday.

"It is estimated that 23 percent of men who have sex with men in Tanzania are living with HIV/AIDS," he added.

"I have instructed stakeholders working with gay people to remove the products from the market."

That is a very serious announcement.

Early on in the HIV epidemic in Africa, there were serious debates. Should condoms be promoted because they actually prevent the spread of HIV? Many moral religious people were offended. Condoms would promote promiscuity. Condoms were bad. Condoms were something visible of something that was not supposed to be.

But, condoms DO PREVENT HIV. They work. And, over the years, we have agreed. Condoms are a very important way to stop the spread of HIV. Young people should learn about them, and should be able to protect themselves. Of course, those who dont want to have sex, this doesnt concern them. But, this knowledge is important.

So, we actually give out condoms free to sex workers. And, we dont tell them to stop having sex. Of course they wouldnt listen to us. That is how they earn money. We are supposed to be realistic, in the real world.

So, we dont tell people NOT TO HAVE SEX. Because people have sex. Whether or not other people want. We just want them, as health workers, to be safe when they have sex.

But, the honourable minister of health believed that this was not okay. GAY TANZANIAN MEN SHOULD NOT HAVE SEX.
So, no condoms and lubricants for gay men in Tanzania..... because this makes them have sex!!!!

I dislike the hypocritical attachment that the minister did when she announced this. It was so out there stupid, that, Lady Minister of Health, I call you out on this. This

The ministry has agreed to work with stakeholders to give the ministry the money they were using to buy and import the lubricants so we could use it to buy beds for the maternity wards."

This was very funny of you, Lady Minister Ummy Mwalimu. This, did not serve the country Tanzania, nor the people...., and it is like you havent yet heard of the lessons of the HIV epidemic.

We cant stop people from having sex. We can help make sure they have safer sex..., whether they are 'criminalised' or not. That, that you forgot, Lady Minister.


Tanzania is cracking down on import and sales of sexual lubricants on the theory that, without them, homosexuality will decrease, Agence France-Press reports.

Sometimes we do things which are ridiculable. And, I ridicule the idea..., too. Guess it is better for a friend to tell you that you have egg on your face than a stranger on the street, no?

But that was only the first bullet that the minister fired. And that was in July of 2016.

But, worse was to come.

In August 2016, It was the Minister of Justice to come out suddenly with a statement. Minister Harrison Mwakyembe announced


"new plans to suspend the registration of any charity or non-governmental organisation that supports homosexuality.
The aim was protecting the “culture of Tanzanians”,

And of course, it wasnt getting limited to that.

The Regional Commissioner of Dar-es-Salaam threatened to arrest gay people, and declared that their contacts on Facebook and Instagram were suspect..... Though that might have been in July..., but, you get the sense of pending gloom and doom...


Time, is time, gay Tanzanians, to rethink your closets. It is no longer safe out there...... (Photo Reuters/Edward Ecwalu) 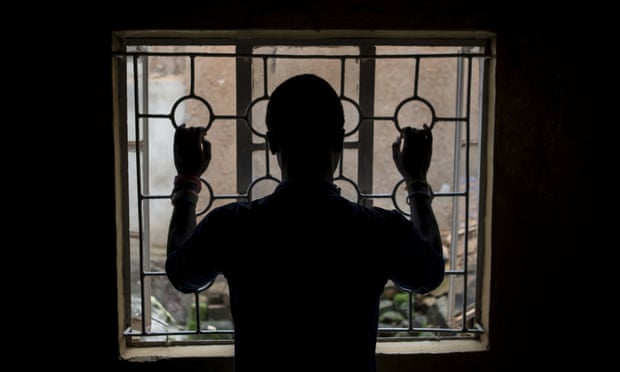 In September, the government threatened to ban NGOs that 'promote' gay rights.

On 1st Nov, the Minister was announcing the suspension of HIV programmes for gay men. And, her reasons were interesting.
Now..., that is interesting. Can you imagine a program which goes out preaching no sex and condemnation of a particular group..., with the aim to be making them have safer sex? LOLEST. Asking for the impossible, the government?
As an HIV programmer, you are reminded again and again, you are NOT making people have sex. People have sex. They do. Errrr, even in covents and monasteries. They do have sex. This is the real world. We dont make them have sex. We try to make sure that they have SAFER SEX....., please!!!!!!!  Lady Minister!!! It is as if the whole 30 years of the epidemic have been nothing and taught the government of Tanzania nothing?

As a sop to those who would think the government totally heartless, this was conceded.


government would continue to provide HIV/AIDS services to adolescent girls, drug users and other groups.

We shall rest assured that the 25% HIV rate amongst this key population of Gay Tanzanian Men is not going to be a problem....... After all, all the other groups of Key Populations will remain targeted...., but maybe we are just starting with gay men? Because, after all, illegal drug use and sex work are ILLEGAL in Tanzania, not so?  Its like saying..., dont worry, this time we are only mad at the homosexuals....., this time...!!!!!

And they are already hurting


A 29-year-old gay man in Dar es Salaam who is HIV-positive said that he was diagnosed four years ago. Since then, antiretroviral drugs have helped him stay relatively healthy and health workers have provided him with condoms, lubricants and information about safe sex so he does not infect his partners.
But now he had gone two weeks without medication. To get it, he would have to go to a public hospital, and he said he fears retribution.
“In this environment, it’s not safe to be a known gay man in the open,” he said.


You have to go brother. Because the virus in your body is going to come up again. You are risking death. Yes, you are. You have to brave the fear, the shame, the possible outing. Please go, else....

Funny thing is, the programs are being funded from the US. Or, is that the problem? Tanzania is saying that, we are poor. We know it. We shall accept help to help our people not die of HIV...., BUT..., with a big exception. We shall not LET you, or anyone else, help Gay Tanzanians.

Of course it is hypocritical. It brings tears to my eyes. Because I am a gay Ugandan. A gay African. Because Uganda was actually doing the same thing just a few years ago. Aid for HIV, but only for the 'good' populations, not sex workers, not gay Ugandans. Tears to my eyes indeed. And that the honourable ministers didnt learn from Tanzania's nothern border is both hurting and ridiculous. Cry, Beloved Tanzania!

The reaction from service providers was gloomy indeed. Of course. Quoted one


John Kashika, of Community Health Education Services & Advocacy NGO, said suspending HIV/AIDS programmes for some LGBT groups was a blow in the fight against the virus.“This is essentially denial of services to people who are at the highest risk of contracting HIV, there’s going to be a lot of implications,” he said.


Indeed, as one Gay Tanzanian noted in dismay


“It’s clear that the government doesn’t care whether we live or die,” said one 22-year-old gay man who spoke on the condition of anonymity because of fear of punishment.

Am afraid you are very right, fellow gay man. It is tough. It is disheartening. It is really, really painful, to me as a gay man, a gay African, and a person who believes that you are a whole human being, and you should not be denied treatment or prevention methods.

Our prayers to you, our queer Tanzanian brothers and sisters. Seems like tough times ahead....., But dont lose hope. You are human. You are real.

gug
Posted by gayuganda at 6:00 AM