My experiences of believers in Uganda made me into an unbeliever. It was from a sense of betrayal. At one time I had believed in all sincerity, in a loving, wonderful deity. I had believed in a family of believers in Christ, my big extended family, in the African style. Ubuntu; a community where we as individuals are self dependent and at the same time dependent on every other individual to confort and sustain us.

I found myself seriously disabused. I cried out, with Jesus like disdain, ‘Hypocrites’! to all these modern day Pharisees that walked the halls and shut the gates to the temples for gay Ugandans’ of faith.

I rejected it. Furiously, vigorously. I asserted that I wasnot a believer.  Saying something like that in Uganda is like confessing to being a demon, evil. Ugandans see no middle ground. But, since as a gay Ugandan I was already condemned in their eyes, why not go the whole way? Why stick to quarter measures?

As I rejected those who disdained and rejected me, I embraced the kuchu community. This was to be my adoptive family, my extended family, these disparate individuals and strangers who knew the person I was, and accepted me for myself, not the lies I was forced to tell in the larger society.

In the matters of faith and deities, the first check on my rejection was the facts that even in Uganda, with all the hyperbole and mudslinging against us, Kuchus were also believers. We are complete human beings that believe in deities and God, just like other Ugandans. We would attend church even when the sermons were about the evils and depravity of homosexuality. We were seeking counselling and relief and completeness in our spiritual lives. One friend, although not a very committed believer, was actually instrumental in my struggle and search to be complete, not only as queer human being, but also as a flesh, bone and spiritual person. That was Victor Mukasa, who in spite of the raving rows he had with Ssempa, managed to believe enough to shock me. Oh yeah, it is almost impossible to have a sane discussion with Ssempa……, but, hell, Victor and his debates! LOL Though I had determined not to believe, I did not think myself the man with the answers. I had nothing to replace in the aching empty space of others spiritual lives which I could savage with ruthless passion. I couldn’t replace other kuchus spiritual craving with my own anger, confusion and hurt.

But, there were beacons of hope.

The Anglican church has been in schismatic mode with its English parent about homosexuality for a while. Ssenyonjo was the sole dissenting voice I heard on the continent. I came to meet him about the time of the anti-homosexuality bill. He is an elderly gentleman, a parent and grandparent. His testimony of personal understanding of the love that the church should teach, of the embrace and love for we kuchus, the pariahs of Ugandan society, was unique in my world view.

I must admit that at that time I was so incensed with the apparent hypocrisy of the Christian leaders in Uganda that the fact that there was a bishop, who in spite of not being gay, championed gay Ugandans made me react with inner suspicion and skepticism!
A gentle grandfatherly figure, he took a lead in counselling gay kuchus, any willing to come to his place on Ggaba road. He even started holding services for kuchus who wanted to, a revolutionary thing. He was, to put it simply, willing to risk his all, at a very vulnerable time for him, to minister to us, gay Ugandans.

The Pharisees of Uganda reacted to this apparent betrayal by one of the princes of the church with disdain. Being gay or known to be gay friendly in Uganda can be very rough. Dr Ssenyonjo suffered for it. He was branded gay himself…, this father and grandfather of eight. For, who but a homosexual would defend homosexuals, thought the embarrassed church hierarchy.

“'outed' in Red Pepper (thelocal toilet paper tabloid) and accused of being gay, allegedly by the Church of Uganda’s Archbishop Luke Orombi - any straight supporters of LGBT rights in Uganda are infact routinely 'outed' and accused of sodomy.”

Ssenyonjo was true to his ideals. An elderly grandfatherly figure, he risked all in his old age to make us welcome. His brethren, fellow churchleaders defrocked him.  In spite of 50 plus years of his previous service to the church, in a country where the depressed economy regularly pushed senior citizens into paupery, the Anglican church of Uganda denied him Ssenyonjo pension. Remember the ‘Rolling Stone’ exposure of gay Ugandans with the headline ‘Hang Them’?  Ssenyonjo’s was one of the faces on the front page. The other was of David Kato, who was soon murdered. 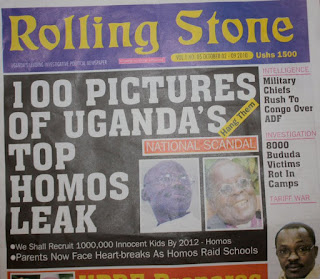 In spite of all that, Bishop Ssenyonjo welcomed us,ministered and fed those of us who were brave enough to admit to our spiritual wounds.  I wasn’t that brave.

When David Kato was murdered, the resident parish priest unleashed an anti-gay diatribe over his body ready for burial. Kuchus revolted, enough was enough. Bishop Ssenyonjo stepped into the gap, and prayed for our departed.

Further away, but on the continent, the irascible Desmond Tutu was also weighing in.

There are people who stand out brilliant fog lights in winter darkness that are charismatic to move nations and peoples. Desmond Tutu, 85 now and seriously ill at the moment, he is light on a hill that has consistently refused to be masked. A man, a human being. An African, a believer and a man of faith. South Africa has indeed been blessed by his life. 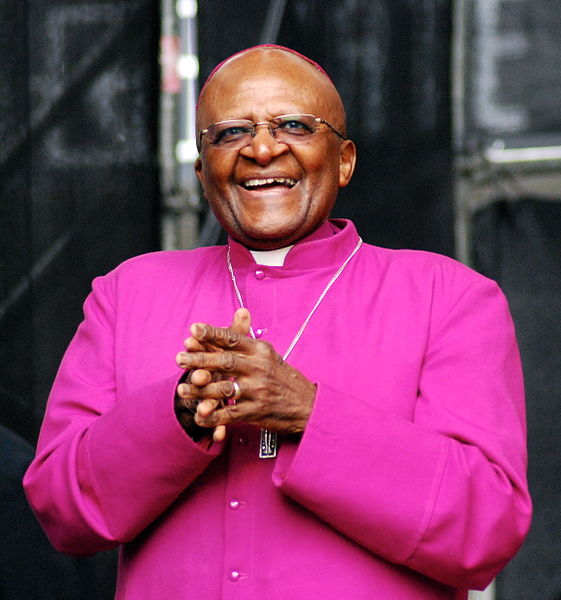 Bishop Emeritus Desmond Tutu. Now, there is a man of men. An Elder in the revered African sense. Idealistic, and fully able to articulate the ideals of his faith and his God in a world when others are crying out loud for him to desist, to stop talking, because he is an ‘old man’ . No compromises for him, a true leading edge thinker. Not caught up in the ‘mood of the moment’, pursuing a path that is consistent with what he believes in, whatever the masses and everybody else does. Believing in non-violence when South Africa was a powder keg, in reconciliation when the majority of his people were crying out for revenge and vengeance after decades’ long historical injustices. A leader able to pull others to his side, with the charisma of his faith and unflinching ability to say it whether its deemed politically correct or not. His reasoned conscience, his faith in a great Deity, those are his guide. And, his star is seen over the continent. His is reasoned common sense and faith, confident and consistent, even when unpopular. And, he will not back down.

It was this giant of a man in a midget’s body that bent his gaze, reason and wisdom, and yes, his faith, to my own personal nightmare of a Kuchu’s spirituality. I love this quote of his-

“I would refuse to go to a homophobic heaven. No, I would say sorry, I mean I would much rather go to the other place. I would not worship a God who is homophobic and that is how deeply I feel about this. I am as passionate about this campaign as I ever was about apartheid. For me, it is at the same level.”

Tutu weighed in on the Anti-Homosexuality bill in Uganda. But, more than that, it was not a fly-by-night news of the day issue. He was consistent, persistent, and welcoming. South Africa is very far from Uganda, but I personally heard and responded to his charismatic portrayal of a deity, God, who was welcoming to me even when I am kuchu; a gay African. And at a time when my Ugandan leaders were saying we were un-African, traitors and western white ass lickers because we were gay, Tutu bent his considerable star power to our support. Of course Ugandan church leaders vilified him.
I was ecstatic. Here was an African, an Elder of Elders, in the true image of Mandela, standing up and championing me. Me, a kuchu, a gay Ugandan, and other Gay Ugandans and Gay Africans!!

That, indeed, was an orgasmic moment.
It was like, justification- the haters cannot be true!!! It was hope in a nightmare, flickering candle flame light inthe depth of moonless night.

The influence of these people helped me not go off the deep end, rejecting fellow kuchus who believed as traitors because of their acceptance of their spiritual lives, in spite of being gay Africans. They helped cool my anger, reflect on the greater need, not to reject my queer brothers and sisters because they dared to believe, but to embrace myself and themselves as complete human beings. They made me to understand that it is not us who need to change, but actually, it is the vaunted church and its elders which needs to change and welcome us. Our faiths are not in the wrong.

That in itself was a momentous flash bulb moment. That was when I realized the seething core of my anger needed tempering, or else it would hurt me, and fellow gay Africans I sought to champion.

Because we are total, complete human beings. We have a spiritual side, which is wounded, and needs succor.

We don’t need to reject our spirituality. We can embrace it. We can live it.

And, we can do that with the help of others, true believers, children of God that understand the God of love that is preached in the scriptures.

Suprising turn around for me? True, and yet, there is more to come

YES! Suprising in the most obvious of ways (everything you said above about being slandered as a whole human being)..but, I must tell you that always you seem more kindly and understanding of your Ugandan "circumstances" than I could ever have been...I always admired Bishop Christopher too..like you I saw him as a modest man who was willing, way beyond willing, to help Kuchus find a way to safety and well-being (in every way)...the David Kato interment settled it...there was no further place to run and hide for anyone...David Kato and Bishop Christopher broung many of back to a more spiritual life...as ourselves and not who others expected us to "be"...I am so glad to read you again today, Gug...what a guy. Looking forward to more of our revelations! Best to you and yours, Leonardo/Guatemala

Sorry, I made several typos (I've had five eye operations since we have *seen* one another)..mainly, I am looking forward to more of YOUR revelatins!