GayUganda is a Criminal

Or, at least that is what Minister of Integrity and Ethics, Dr. James Nsaba-Buturo would like it to be. When that law is passed, gug will be on the lookout for the policeman knocking at his door, to be told that he is under arrest, a self confessed homosexual, as he is.

KAMPALA (AFP) — Uganda's controversial ethics and integrity minister who last month called for the wearing of miniskirts to be made illegal said Saturday he believed civilisation was being threatened by gays.

"Who is going to occupy Uganda 20 years from now if we all become homosexuals. We know that homosexuals don't reproduce," James Nsaba Buturo told a press conference.

"There is now a globalisation of homosexuality and people in Uganda are attempting to take advantage of the globalisation," he said. "It is an attempt to end civilisation. It is that serious."

Buturo, a devout member of the Church of Uganda, part of the Anglican Communion, called for anti-gay legislation to be enacted.

The government needed to "act quickly to provide legal cover for" for a more aggressive campaign to eradicate homosexuality, he said.

Human rights groups have repeatedly criticised Uganda for detaining gays and excluding them from HIV/AIDS programmes.

"What's wrong with wearing a miniskirt? You can cause an accident because some of our people are mentally weak. Wearing a miniskirt should be regarded as indecent, which would be punishable under Ugandan law," he said.

Seriously mental, that is what I think of Honorable Nsaba-Buturo. But he is a mental member of government, and an influential man.
I didn’t include the point where the same honourable dreams of arresting and detaining gayuganda. Presumably for life. Here it is.

The state of moral health in our nation is challenging and we are concerned about the mushrooming of lesbianism and homosexuality," Ethics and Integrity Minister James Nsaba Buturo told a news conference.

"Ten years ago, this phenomena was not there, but the disease has penetrated everywhere," he added.

Same sex intercourse and marriage is illegal in Uganda. The official sentence is life imprisonment, but there is no record of anyone being convicted in Ugandan courts.

Buturo said that the law would be changed to increase the number of prosecutions.

"It is true that the law on homosexuality is not comprehensive and that the criminals just walk away and police find it difficult to prosecute," he said. "We need to address this gap."

"We want it to become law in that if someone is a homosexual or confesses to being a gay or lesbian, then he is a criminal," he added.

Gays, who are believed to number in the tens of thousands, remain underground in Uganda as a result of the stringent laws. 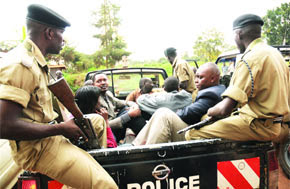 This time, it was robbers. Nsaba-Buturo would like it to be gays and lesbians, off to Luzira!
Of course we remain underground. Not with all these devout firebrand Christians out to make Uganda a holy nation.

And, do you know the most interesting thing? These statements did not get quite the attention they got inside the country, as outside the country. When the minister went on the tirade, the local journalists switched off. He is too radical. And he is too out of touch, and stupid (How do I dare call a man with a PhD stupid?) but, is it abuse, or a correct observation?

Or, it might have been a fast news day, what with all the issues of the huge stealing of pension funds from the National pension funds, by Government ministers to boot!!!!! Minister of Integrity, and Ethics, did you even know that that was happening? Why are you obsessed with my sexuality? That is an interesting question I would dearly like answered!

Anyway, here is GayUganda, the future criminal, using cyber space to thumb his nose at anti-gay Nsaba-Buturo. You are seriously mental, man!


GayUganda
Posted by gayuganda at 9:43 AM

I am continually amazed at the many instances of what I call "intellectual stupidity". Mugabe has, supposedly, more than one degree - yet look at the blatant stupidity of some of his ideas. A 2 year old would know better.

The stereotype of the bumbling professor is based on fact, as are most stereotypes. Intelligence and education by no means guarantee that you have a decent human being. Some of the most decent people I know live in rural Africa and cannot read or write.

"A little child will lead them" never seemed a truer phrase. (And maybe this self-styled 'Christian' minister should go back & think about Matthew 18: 2-4 at the same time!).

No he was taking the piss wasn't he?

this guy continues to amaze me. He is currently 'investigating' the Kiwewesi case... Talk of church and state mixing!

WildeY,
I was a bit worried. You have been MIA.

For Nsaba-Buturo, I have hesistated calling him homosexual. Doesnt give me the same vibes as Ssempa, but, you never know!

As for people being 'mentally weak', ha! I think it is a case of 'projection', the guy just has his own problems which he insists on pressing onto other people...