Outrage at the High Court

Ok.
The mega church in the heart of Kampala, Watoto Church, has also gotten onto the solution of the 'homosexual problem' in Uganda. Sigggggggghhhhhhh!
It is headed by a Canadian, Gary Skinner. The church that is. And, it was once called Kampala Pentecostal church. Now, it is called Watoto church after its more famous choir of orphaned children.
Here is their 'gay' programme...!
Why should you know about it? Why, why shouldnt you know about such a direct interventional approach from the American right in Uganda?!!! Well, why shouldnt I play the politics? It is a tough world. And, I aim to use all my blessings.

The project involved identifying, providing care for and reforming homosexual youth, helping them re-integrate into society.

By working closely with community leaders and others who have experience in homosexuals’ reformation, Watoto Church through this group is managing this situation in the homes and schools in their community.

Interacting with the affected families, and holding discussions with both parents and children is also helping turn the situation around.

Poor youths, who with such Christian love will be embraced. Poor kids, who will have this to deal with in Uganda!
---


By all accounts, outside the court yesterday was chaos.
Ok. First, the Rolling pebble was sued by three individuals who were 'outed' as gay. The judge slapped the pebble with an anti-rolling charm for 3 weeks. And, Tuesday, the pebble was supposed to convince the judge that it should not be stopped from tumbling down hill into cess pits of mud and hate.
So, come Tuesday, there was a court hearing. But, apparently, the lawyer for Giles Muhame was Missing in Action. So, a delay was given.
No. the action was not inside the court.
It was outside the court. Pastor Solomon Male had put in appearance. And, he was ranting. Something which was caught by AFP.

Speaking on behalf of the National Coalition Against Homosexuality and Sexual Abuse in Uganda, Pastor Solomon Male accused the court of using the ban on outing to protect "selfish, heartless and aggressive criminal offenders."

Shouting on the courthouse veranda, Male asked, "How can homosexuals who deliberately break the law claim right to privacy?"

The fracas was real. Apparently, the gay people who appeared at the court were being verbally assaulted, and pushed by Ssempas... sorry, Pastor Solomon Male's brownshirts, who were all angry that the courts of Uganda seemed to protect gay Ugandans.
Well, you see, we are self confessed homosexuals, who have no right to privacy, (remember Ssempa and the 'eat da poo poo' videos?), and because we are homosexuals, we are selfish, heartless, aggressive criminal offenders...!
Well, I am not speaking from a totally clueless position. Here is the flier that Solomon Male was handing out, on behalf of Uganda' s National coalition etc etc against homosexuality.... 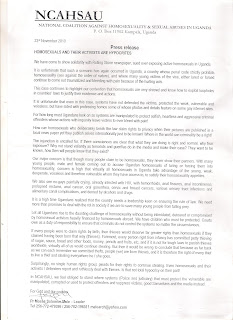 Read it. Hope you dont have to get a magnifying glass. Uh, I am sorry that my countrymates are so excitable.....
Have a good day.
In Uganda, it is all so 'life as usual'!
gug
Posted by gayuganda at 11:42 PM

I think Uganda is going to show the world the results of religious based rampant homophobia gone very wrong. Sadly, it's Uganda and the Ugandan people that will suffer in the end.