Life goes on..., and Murder most foul

The world doesnt sleep, even when I sleep.
The oil spill in the gulf of Mexico is a deluge. There was a tremendous explosion of an oil tanker in the DRC, with hundreds of casualties. Seems as if the world is full of news, like a river, sometimes flowing fast, sometimes slow, but always flowing.
I am told that I am a fair advocate of gay rights [uhhhh, someone from the 'other side' once told me that this site is a 'gay recruitment site'. I was flabagasted.... but, at that particular point I was wondering what they meant by 'recruitment. Guess I got the definition]. In truth, I write more about what happens in my skull and to me than going out and, err, 'advocating'.
Of course I am fascinated by the fascination that the rest of the world has for my sexuality...
Ok. The Church of England is in a snit about a gay bishop. Seems as if there is one particular gay man whose colleagues feel he should become a bishop. First time he stood down. But, some other colleagues of his believe that just because he is gay, that does not stop him from becoming a good shepherd. A bishop.
So, again they nominate him. It is very interesting. (image from the Guardian) 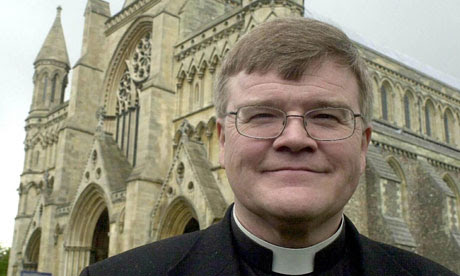 Now, there are others of the 'Church' who say being gay is being a sinner... however they define it. So, they are threatening to secede.... if he becomes Bishop in the Church of England.

Conservative parishes in the Church of England could seek alternative leadership from abroad if a gay man is appointed as bishop of Southwark, clerics warned today.

The argument over homosexual clergy in the Anglican communion was reignited at the weekend when it was disclosed that Dr Jeffrey John, the dean of St Albans, is among nominations for the post vacated earlier this year by the Right Rev Tom Butler. In 2003, John was forced to stand down from his appointment as suffragan bishop of Reading because of his sexuality after protests from traditionalists.

No. I don't need to point out that, this is the very reason why we think we are discriminated against. We gay people.
One man is so suited for the job that he is suffered the nomination a second time, though he had to step down at one time, because of his sexuality. His colleagues nominate him. Apparently he is suitable. But, for his being gay. That, that is prejudice. In whatsoever book you read it.
It doesnt have to be as obvious as in Malawi, Zimbabwe, or in Uganda.

THEIR crimes were “gross indecency” and “unnatural acts”. Their sentence was 14 years’ hard labour: one intended, said the judge, to scare others. He has succeeded. A court in Malawi last week horrified many with its treatment of Steven Monjeza and Tiwonge Chimbalanga, a gay couple engaged to be married. The two men are the latest victims of a crackdown on gay rights in much of the developing world, particularly Africa.

It does not have to be as blind as bigoted as in Uganda.
I came across this article that quoted Nsaba-Buturo's words. I admire the man (yeah, he is so brave to utter such stupidities....!). He is well read, and has had a bit of exposure in the world. No, he is not one of those people (like Bahati) who are simple village boys in the guise of men of the world. But, here are Buturo's thoughts on homosexulity in Uganda. Remember, he is a Minister in the government, and these are the thoughts that he and most, most, Ugandans have of us homosexuals.

is a robust man with a warm smile, a soft voice and a firm handshake. He is a strong supporter of the anti-homosexuality bill and vehemently denies that the Americans had anything to do with it.

"I find that total nonsense," he said of the suggestion that Lively inspired the bill, adding that he would have been in a position to know about it if that were the case.

"The resentment, the anger, the . . . way this matter is looked at is cultural. It's not something somebody has brought in from elsewhere."

Buturo says the new legislation is needed to safeguard the Ugandan way of life. The current law does not make it a crime to recruit people to the homosexual lifestyle and distribute gay-friendly literature, he explained.

"Thirty years ago in your country, there was no homosexuality . . . .Today, it's a powerful lobby. Today, they control government. They control institutions around the world. That's why they intimidate, they threaten. They are growing in numbers. Five years from now, they could be the ones in control. So where do you get children from? What becomes of our civilization?" he asked.

Homosexuals are bringing their message into Ugandan schools and communities, particularly targeting young people, saying that theirs is a lifestyle as good as any other and encouraging people to try it, Buturo said.

"Everything we stand for, everything we are, revolves around our ability to produce children, to have children. It comes down to that. Anything that runs counter to that arrangement is dangerous. And in our part of the world we don't believe, for a moment, that people are born homosexuals."

"If someone is born that way, why do you then spend huge sums of money attracting people to that lifestyle?" he asked.

"My office has over 60 former homosexuals who were recruited initially, but they have abandoned that practice. And they are the ones telling us the horrendous, horrendous experiences they go through that are . . . an unhealthy risk."

Gay sex has health consequences that the system is not set up to deal with, Buturo said.

Ignorance. Bigotry. Lies. Sheer desire not to believe anything that is contrary to one's set beliefs. He is a shining example of prejudice that we all have. Yeah, all of have it.
Lately, I got interested in Harry Potter fanfiction. You know, Rowling's work is a classic. I just love them. And, this being this day and age, others have taken a liking to it and kind of expanded on the themes. One of those is the sheer prejudice... muggles vs wizards, wizards and magical animals, etc, etc. Browsing through this fanfiction site has been revealing.
Yeah, we all have our prejudices. Doesnt mean that our misconcepts are not hurting to the people that we conceive as 'bad' or 'dark'. And that the 'white wizards' of our lives are free of the very logs that they assume the dark wizards have in their eyes.
---
I have seen the reports of an LGBT advocate whose gruesomely beheaded body was found after missing for a few weeks. Box Turtle, Throckmorton  and Changing Attitude.
Ugly. Very ugly.
I cannot confirm the motive for such a horrible act. On the one hand, my country mates sincerely believe that I should be killed because I am gay. That is a sentiment that is widespread, and very, very concrete. And, with the likes of Minister Buturo, and respected religious leaders supporting the evilness of gay people, and the anti-gay Tabliq moslem squads and lists of gay people that I have been hearing ….
Yes, of course I am worried. I would be stupid not to be worried. The anti-gay hatred like in Uganda is not only in 'official' circles.
But, I cannot at the moment confirm or reject anti-gay motivation for the murder. Maybe, just as a favour to me, if you are anti-gay and love to assert how evil we gay Ugandans are, you would read the blogposts above and temper your words a little? Please?
Hope your day is ok. Be well
gug
Posted by gayuganda at 5:08 PM

Email ThisBlogThis!Share to TwitterShare to FacebookShare to Pinterest
Labels: Church of Uganda

The beheaded man was active in Integrity (Which the Anglican pro-gay organization) so motives are pretty obvious.

I worry about the pro-gay priest who is missing and unaccounted for.

(Sorry I have to use "Anonymous" since I don't fit any of the other provided options for signing.)

You new blog design makes reading the actual text much more difficult because of the illustrations in the background show through.

I first read of the motive on Changing attitude, and I had no idea how to react. At first I was mortified, then I was mad. Still not sure how I feel, but that is just one example of what could be much more. Reminds me of your post about the group that has taken it upon themselves to clean up Uganda....

This could be interesting.

And the recruitment bullocks..... that just cracks me up every time I hear it.

According to an article in The Advocate, his head was found today.

This doesn't look like christian fanaticism to me, so read my lips...j-i-h-a-d

Buturo's word are like a river of clear water. The anus wasn't made for sex, why the gays insists with that?
Are there any scientific investigations programs to hunt the gay germ in Makerere University?

Good for you, Sebastian.

Your intellect is a mountain. Your perception like a river.

Thanks for your wonderful observations. If MUK doesnt have that program, I bet you are going to correct that oversight? We all wait with bated breath....