Sunday morning.
Am relaxed in the seating room sofa. Typing away.
Uh, work, work, work. Have a deadline to beat, and that is so yesterday. So, my Sunday, beautiful as it is, has to be spent in a computer, trying to finish what I should be doing.
Have to laugh at my friend. When I am concentrating at work, he can talk over my head, poke, slap, step on me. And I am in another universe, barely acknowledging that he is around. Anyway, he got tired of that, put the food on the sigiri [and asked me to mind it! Crazy man, of course it will be burnt. Doesnt the man learn anything!]
Anyway, he has gone to tend his beard. I did hear that, at least.
Last barb was that this 'activism' earns me no money...! Hey, hit the jackpot. But, I think it was because I had lost my concentration.
No. It doesnt earn me money. Well, Buturo may think what he wants. I have never got the 20 million USD which he promised was supposed to be mine. Yeah, these crazy people. They want to kill us, and then think that the only motivation we have is foreign monies. They are really lacking in common sense. What of the threat to our very lives? Do we count as stupid simply because we are homosexuals?
Heard a bit of news. Snippet. There may be some movement on the Bahati, Anti-Homosexuality Bill. That monstrosity is not dead. Not as yet. And, Bahati believes it will become law.
I don't know how true that is. I can only hope that it doesn't.
And, the Rolling stone, that rug has again published. Shift of focus. Before, they accused us of many nasty things, like 'recruiting' children, and other nasties. And, of course published our photos, asking that we be hanged. 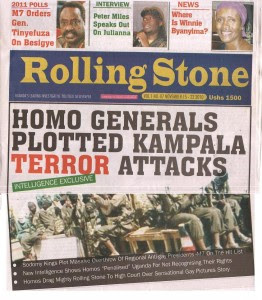 After the court injunction stopping them from doing that, they are accusing us of masterminding the terrorist attacks that had more than 80 Ugandans killed on the day of the football world cup final. And of trying to assassinate the President of Uganda. Silly thing, conspiracy theories.
Incredible. Stupid. Fallacy.
Why are gay people such a threat to some people? Why do they want to stoop to the point of telling naked lies to justify having us killed?
I am ashamed to admit that these are my country people. But, they are.
Now, the importance of this new campaign strategy is funny. We are too benign to be a point of interest for the security forces of the country. Hey, I bet that I have been investigated, and am thought a benign crazed homosexual, who earns his keep in the country, and is too un-interested in politics to be a threat to them. Of course the lack of interest on my part is strategy...!
But, the likes of Giles Muhame are frustrated that the security forces are not interested in us. In his view we are terrorists. No. This is not an exaggeration. He has said so in interviews on BBC (I do have a clip somewhere) and on CNN. He believes we are worse than terrorists.
So, he goes ahead and accuses us, with not a hint of evidence, of masterminding the bombings. Bombings whose memory is still a raw wound in the minds of most Ugandans.
Yeah. You may laugh.
But, remember that Giles Muhame, and the guys who are behind him, (who I believe are Ssempa and clique), know the country, the politics.
I can, and will laugh off that accusation.
But, I am more worried of a knock on our door in the middle of the night. And, disappearance into a government 'safe house' for some non-gentle questioning. Melodramatic?
I surely hope that I am.
I have to go check the sigiri. The damned charcoal is very good at burning up everything...., uncontrolled fire you know,.. one of the reasons I always burn the food while minding it...! Hey, we all have different gifts, don't we! Mine is definitely not the kitchen.
Gug
PS. [I was lucky, this time. Just in time... whew!]
PPS. [When he came back, I found there was something else I had done wrong. Why does one have to cook to eat?]
Posted by gayuganda at 2:23 PM

Email ThisBlogThis!Share to TwitterShare to FacebookShare to Pinterest
Labels: anti-gay

Speaking of silly conspiracy theories...here I sit in front of my computer in rural Latin America and have CONFIRMED (in my own mind that is) that Giles ¨inhumane¨ Muhame is overly-well connected to a repackaged LGBTI-Nazi smear campaign...you know, a further development of decayed thinking from deadly Scott Lively´s introduction to Pink Triangle LGBTI ¨ NAZI monsters¨...fortunately for these ignoramouses the ¨monster¨ in us hasn´t turned on THEM and their lies and wickedness--nope, not only are we not being ¨paid to hate¨ like they are (by religiouslike extremists who make a living off of hate-mongering in the not-so-good-at-the-moment U.S.A.) we are CIVILIZED (and probably accustomed to the abuse anyway) while they are instigating terror in OUR LIVES like thugs in the street! Same old story, these opportunists/nutbags are actually engaging in the behavior they wish to attribute to US!

Evil hypocrites and all-around-grandstanding-idiots try to get away with murder...literally!

I imagine that President Museveni allows this crap because he thinks it will bring out the vote when he parades Bahati, Orombi, Nasba Buturo and his own ¨creative smearing¨ of LGBTI citizens wife Janet! Sure, not bad publicity for those who are running on EMPTY in the personal integrity department and have nothing to offer when TRUTH and HONESTY is the only solution to a popular CULTURAL WRONG!

No sense telling/facing a difficult truth when sickthinking/beliving is rioting for the blood of innocents!

Just occured to me...I bet the ¨Homo Generals¨ aren´t going to take kindly to such nonsense from the Rolling Quacks!

I love your posts. It is one of the few that i follow. So when i read this last sunday after work, i had no words. Didn't know whether to laugh or get angry. I promised myself that i would come back and leave a coment. Well, i came accross a poem by Maya Angelou that i thought i should share. Mostly i would have loved to share it in parts atleast the 1st three verses but that would not do justice to the whole poem. Here goes...

"You may write me down in history
With your bitter, twisted lies,
You may trod me in the very dirt
But still, like dust, I'll rise.

Does my sassiness upset you?
Why are you beset with gloom?
'Cause I walk like I've got oil wells
Pumping in my living room.

Did you want to see me broken?
Bowed head and lowered eyes?
Shoulders falling down like teardrops.
Weakened by my soulful cries.

Does my haughtiness offend you?
Don't you take it awful hard
'Cause I laugh like I've got gold mines
Diggin' in my own back yard.

Does my sexiness upset you?
Does it come as a surprise
That I dance like I've got diamonds
At the meeting of my thighs?

Out of the huts of history's shame
I rise
Up from a past that's rooted in pain
I rise
I'm a black ocean, leaping and wide,
Welling and swelling I bear in the tide.
Leaving behind nights of terror and fear
I rise
Into a daybreak that's wondrously clear
I rise
Bringing the gifts that my ancestors gave,
I am the dream and the hope of the slave.
I rise
I rise
I rise."

Wow, thanks to you all.