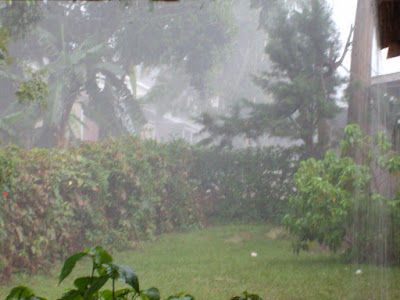 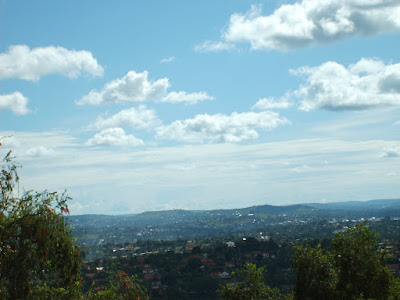 It has been raining. The proverbial cats and dogs.

Evening, , soon after the first major rain of the season. It feels like it has been years since it really rained. Not true, but we have just been through one of the worst dry seasons. Cant believe how dry the grass on our lawn had got. We stopped cutting it, and waited, prayed for the rain. I started thinking that ‘global warming’ is real.

It maybe. Or not. With our extreme poverty, we are plundering the environment around us with no heed to anything except the need to survive. Forests are down, trees are not planted. Even the lake is under threat. Poverty is a curse. We are hungry, and eating the seed.

But today, this afternoon was the first major rain of the season, over .

I was complaining of the perpetual red dust before? Now, I believe it will soon be time to complain of the red mud. Mud everywhere, mud and water and rain.

Back to the first rain. I was home. Has been threatening to rain over the last week or so. You know, bright, brittle, hot afternoon sunshine. With something intangible promising rain. But it was not raining. I got out of the house around midday and it was the same kind. But there was a hint of cloud to the west. Well, it was there yesterday, but it hardly rained. At least over .

Today, by four, the hint had turned to huge clouds, pushing, flowing in from the west. Wind, precursor to a storm. Then the pretty blue was soon hidden, the shiny shin lost as the clouds became pregnant with rain.

Wind, gales of it swept the dust up and away, over the dirty streets. I headed home, and, great good luck, soon after the first drizzle started, my lover comes back. Just in time. I believe the best place to be in a storm of rain is deep in bed, wrapped around my lover.

I persuaded him into bed. Had to pull him there. Dratted man, he was into some house keeping, as if the storm could wait.

And it was a storm. In a short hour and a half, more rain fell than has come down in three, four months. Sheets of it, washing the air, scrubbing the roof. It is baati, naked baati, the roof. No under-roof to hide the thunder of rain. The drumming drowns out all conversation, and it was loud, insistent. Halfway through came hailstones. They were heavy, solid, and many. Pity anyone who was outside in that rain.

I dosed off. He didn’t! But we remained in bed.

Now, we are out. Busybody, he is continuing to look after our confort. Preparing supper. Lazy me, I am in the computer. Fact is, the rain has caused a power failure. Usual occurrence. So, I have to work my lazy arse off the laptop battery, if that is what I want to do…

Just had to celebrate the first rain of the season. Beautiful weather. Dull, overcast, dust scrubbed from it, but it smells clean and sharp… and beautiful. To the east of the country, people were dying of hunger. Though the rains will now bring too much water, and the harvest is not that quick, still, there is hope that this great lakes region is still a lake region.

Posted by gayuganda at 6:24 PM

God, I miss the feel of proper rain!
When it rains here, it feels like it hasn't quite made up its mind to fall in earnest. Thanks for the desk-top backgrounds, bro.

The starving in the East. :(

Love it when it rains like that. Reality shrinks to the small bubble of me, a cocoon bounded by water and air and noise...
And I can choose to add to that energy like a child does, leaping and splashing ans shouting with all of it. Or contrast it with a calm and methodical quiet. Or both!