Can they all ever be brought to justice?

Is life in prison, as opposed to the death penalty justice? Personally, for some I would prefer 'Hanged, Drawn and Quartered'- am I abusing my descency and humanity with these beasts? Pol Pot, the Srabeniza, etc etc.

* Bagosora guilty of masterminding genocide which left at least 800,000 dead

* Genocide began after plane carrying the leaders of , crashed

* Bagosora was charged with genocide and crimes against humanity

* The United Nations established the genocide tribunal in late 1994 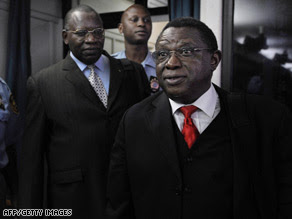 Posted by gayuganda at 1:12 PM

Email ThisBlogThis!Share to TwitterShare to FacebookShare to Pinterest
Labels: Rwanda