Oh, I had forgotten. Today is Friday also. That is why there is so much visible presence of Moslems wearing their faith on their sleeves around town.

Amiss of me, I had not wished my Moslem brothers a Happy Ramadan. [though, to be fair, some will consider me, GayUganda, wishing them a good fasting holy season the height of insult] But Happy Ramadan, nevertheless, however you take it!

Seems as if wherever one looks, there is someone proudly identifying as a Moslem. Of course they are fasting. Goes without saying. The Holy Month demands fasting from every faithful Moslem.

Decked in white, flowing robs, and caps; skull caps and all sorts of others. There are differences. The Tablics, with their goat beard and ankle length trousers are easily identifiable. Don’t know the others. My background is not Islamic. But I have noticed some of the women are putting on un-relieved black, others are in the famed Moslem bukta, little of the skin showing in this holy month, for us lascivious men [ahem, except I] to be attracted to. The men are also resplendent.

But I noticed the proud Moslems late.

It is the mosque which continues to fascinate me.

Growing up, it was the hideous ruins of a minaret of the Amin years that I remember. An eyesore from which, even I, as a child, knew enough not to see, nor to draw attention too.
A tall, hollowed out edifice on the top of the most central hill of Kampala City.

But now, it has been replaced by the mosque.

During the day, the bronze of the domes and the cream of the walls are eye catching, to say the least. The bulk is on the shoulder of a hill, misnamed Old Kampala hill, but surely it is a hill shoulder. It overlooks much of the bulk of the city, from the taxi parks. Catching, drawing the eye, whensoever one looks up. The minaret straight, proud, piercing the skies. From Namirembe hill, which is higher, it is the bulk of the mosque which is imposing. From the taxi parks, it is the squat magnificence of cream and bronze, outlined against the sky, that is so impressive.

Night, and the mosque is a sight for sore eyes.

Ramadan means to light up this pride of Ugandan Moslems. All the lights are on, throughout the night. [night prayers in progress, at the given hours.] And it is beautiful. Kampala at night is like a bowl, with the sparkling gems of light within the black depths. Now, the Mosque is like the crown gem, crown jewel of them all. Closer, the cream and bronze seems to glow in the light. Further, it sparkles, a gem bigger and brighter than the others.

Last evening, going down the street past Hotel Equatoria, I had to stop and look at it. It was simply magnificent, the mosque. A huge, bulk, well lighted, a distinct royal yellow white against the deeper absorbent black of the sky. Dwarfing out in its brilliance all the lesser lights.
And, just above it, like an omen of the season, was the moon. Slice of moon. A magnificent symbol of the harmony of man and god. Allah in this case.

I walked past, stopped and gazed. Impressed, inspite of myself.

Shook my head and walked away, towards the Old Taxi Park.

But I had to come back. Sights like this are too rare. I needed a picture. It would be magnificent. Followed five minutes of farce, in the sight of the boda boda men. I mean, I am no tourist. My skin is black, so no Ugandan would expect me to stop and try to get a picture of the moon, [except my long suffering lover].

I searched for the perfect position, internally debating with myself how to stand, where to stand, and not lose the respect of the silent boda-boda men. Couldn’t ask to loan a perch on their motorbikes. Too low. The signpost above was too high for me. And putting the camera there seemed to be an imposing task. And, of course there was the matter of safety. On Kampala road above, had had to pull my bag closer to me. Seems as if the street children are back. Didn’t want to seem too tempting a target.

Defeated, I moved off. All the photos I took will have to be deleted.

But the Mosque still stands, something to look at.

Oh, I am not planning to become a Moslem. Sorry to my Moslem brothers and sisters. When the Mufti says I should be marooned on an Island, I am reminded of the extremes of Osama bin laden. And of course, just below the Gaddaffi mosque is the other, Shia mosque. I remember the four policemen who were beheaded when one of the Moslem sects had taken over the mosque, in the interminable religious rumbles.

The mosque is magnificent, nevertheless. And I will continue searching for the perfect picture of it. 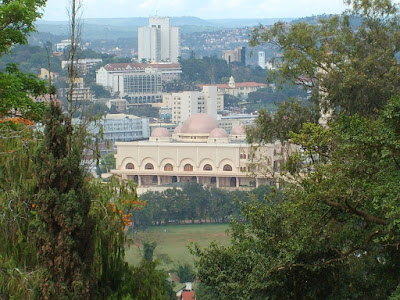 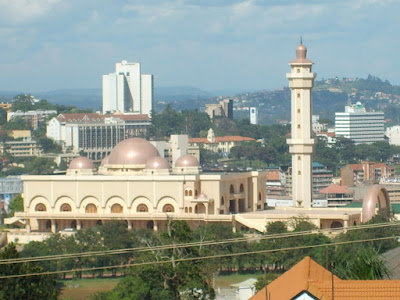 The Mosque, from Namirembe Hill 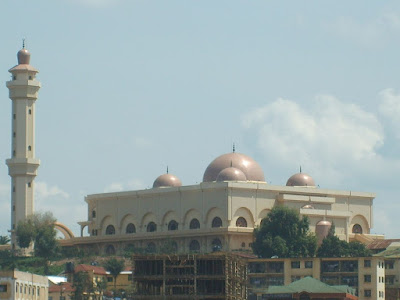 The Mosque, from the Equatoria

GayUganda
Posted by gayuganda at 1:30 PM

Thanks for the reminder, I too will be wishing my Muslim brothers Happy Ramadan.

You must, being cautious of course, go back for the nightshot...I bet it was stunning last night (I must remember to check out our "slice" tonight).

Have a fun weekend,

I meant, Happy Ramadam to our Muslim friends.

I thought you were wishing me Happy Ramadan.

Raised my eyebrow. But, matter of fact, it is kind of traditional here to wish everyone Happy Ramadan, or happy Easter, or Merry Christmas as the case may be.