[I wrote this yesterday. Today, Sunday, it is a very beautiful sunny morning. Though, as I speak, there is a hint of water in the air. Soon, it might rain. Just wanted to share this with you out there!

Was raining when I woke up. My lovers warm body was too tempting. Too tempting by half. So, set off almost late for the morning. It was a drizzle then, but once out, I could see the dark thunderclouds to the east and I knew it was going to rain. Just prayed I would be able to get to work before the heavens opened up.

And they have, when I was already at work. 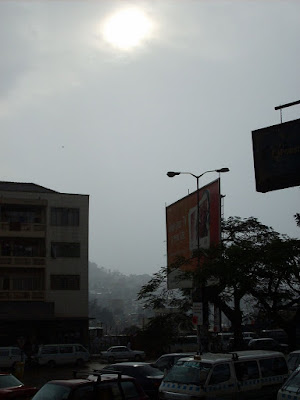 The sun is a favorite season, with the heat, and the brightness, and the sheer sense of light all around. But the rain is also a favorite season. True, the roads become ribbons of red mud, and we have to pick and choose where we step. The light is lost, and the overcast is usually heavy. But, usually, it does not last that much, which is a fantastic thing. Yet, when it is raining, the gentle drops on the roads, the splash of water as the vehicles go by, everything. It is a beautiful season.

To take the world around me

Put it in words-

Not immortal, not transcendental,

That will lift from the spirit of the moment

Wrap in words to communicate;

And make it sparkle and spin in words.

The mist of the morning, drizzle that will not let up,

Making so many of us, Kampalans

Uncomfortable with the, unusual wetness;

It is a bane

To the movement of the earth,

The faint stirring of the waters, though it be far off.

There's something in the air that I would put in words

Something in the skies, the dark clouds, the heavy mist

The traffic on the roads, the splash of rain on the streets;

The squish and squelch of water underfoot-

But nothing is more uncommon

Than me being here, listening to it, with the heart, the mind open.

Even my soul listens

To the mood of the moment-

Sombre ecstasy, the power of living, that of breathing-

There's something in the rain

And the skies, and the mood-

There's something beneath, that has muse stirring. 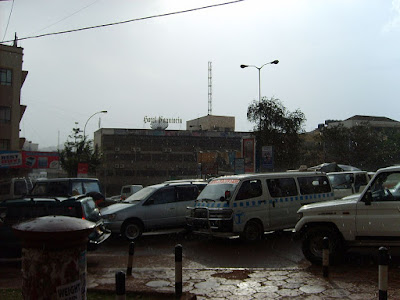 Ah, but this is beautiful.
You have captured the feeling completely. It is what I used to think of when I watched the rain in Kampala. I used to look out the window and think of the world being washed anew, refreshed...like a new-born baby gurgling happily in its mother's arms. So much potential for life and new beginnings. Cleansing that which had become dirty...

Now when it rains, I look out the window from the third or fourth floor of a building and I see merely sleet falling on concrete. The buildings have blocked out the sky. I am too high up to smell the wet earth. And even the pellets of rain when they reach my skin seem harsh and pointed; no longer soothing.
I used to stand in the rain and let it wash over me. It was a great feeling.
But this rain feels like it would soil me.

*I fear I have revealed too much in this sentimental comment. Have I not? :-)

Yes, it was revealing.

Homesick? For the dust and mud and rain... It will pass, and of course you will be coming back to see us, and we shall celebrate you on BHH. And, maybe, I will be there too!