Now, I am going to share with you a bit of my weirdness.

I was late to work because of this bird. It lives near my house, and I see it often. But that day I was late at work, I had just gotten out of the house when I saw it. I stopped in the middle of the road to take the photos. And I believe the bird is a she. So, here we go. 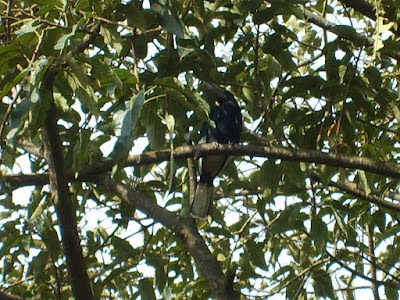 You cannot see it that well. Let us go closer. 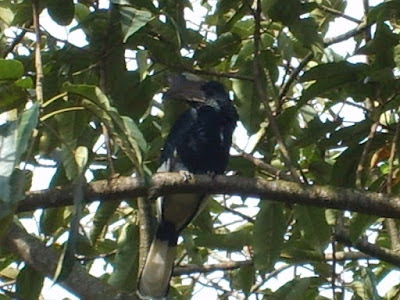 the contrast is not so good. But you can see the bit of black. And the green of the leaves.

Now, look towards the head end. Notice something beautiful about that? 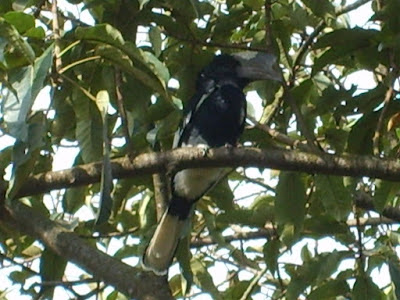 It is the nose.

Now, you see it from the side. All the face to face photos were terrible. Couldnt come here.

And the bird was curious. Turned the head back and forth, trying to make out what this crazy human was doing. 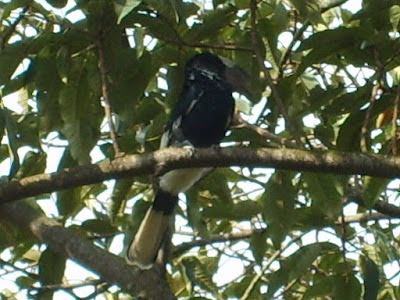 No, the bird is a Hornbill, I believe. Makes a good nice honking noise.

And the nose? The head is all nose, as you see.

So, I wanted to twitch the nose of a horrible little sister. First she wanted to be given an African name. And some suggestions were given.

She should have come to big brother to be told all the intricacies of African naming. A name means something. Imagine the ugly names which were given to her. They are here.

In protest, I decided to name her Kamese. She did not like the name, but since I am big brother, I growled, and she decided to accept it.

Now, I have decided to give this bird a name. I name the bird in the pictures DeTamble Phoenix.
Posted by gayuganda at 4:44 PM

Email ThisBlogThis!Share to TwitterShare to FacebookShare to Pinterest
Labels: Pictures

I want a African name too...do you know me well enough yet for one to mean something that is remotely me? I'll paint about it if you give me one...adventures, real life ones are my favorite...don't name me Orombi...promise?

:-) I was wondering why the pictures were called deT until I read to the end. Nice name! Good choice my pushy Brother. And DeTamble Phoenix is most certainly Baganda(sp?), did you see that nose??

And you're so right! They came up with THE crappiest names! I'd hate to be one of their children, they'll give it some long, incomprehensible, unpronounceable, craptarded name.
Did you see what Antipop tried to name me? OMG!! After some stinky alcohol. Pffft!

Still don't know if I like being referred to as a mouse, no matter how cute they are. Couldn't I have been a Dragon or a flower or something?

BUT FINE!! Kamese...
and quit growling at me or I'll bite your nose with my awesome sharp teeth!!

PS. Glad you figured those photos and I like them. You weirdo! :-)
When's more coming??

Wait. Too soon for now. We shall look for a suitable name. No, Orombi from me would definately be to someone I do not like!!!!

deT, ha,
I am afraid this evil brother of yours is the only one who gave you a bad name. Aber from Acholi is certainly what your loving mother would have chosen for you. And, like Antipop said, though the drink is disgusting and horrible, it is still one of those famed, precious things. It certainly would be an honour to be named 'Omuramba'. Especially if the person naming is Hu...

You forget, Ugandans, unlike me, are very sedate, un-volatile people. They would never think of giving you a bad name!!!!

Now, as for Kamese, it is true it is a name. We have a person that I used to see on TV preaching, but the name was Pastor Kamese and that used to set me off in gales of laughter. Am afraid I never understood what he preached...

I am your evil brother [evil grin] who is able to name you as I want! I can be rude, ha ha ha!

By the way, why didnt little sis give a suggestion? And I dont mean names like 'Princess' Phew, what self respecting parent would name a child that????!

...You named me after a pastor?

Kamese. That name belongs in a pit of vermin and you won't be tarnishing me any longer with something a pastor has claim to.

You should be glad you'll never meet me because if I ever get the chance I will fucking bitch slap you!

I didnt say that I had named you after the pastor. No way. I know your allergy to religion.

I just gave you a name, and if you want to refuse it, you cant, my dear Kamese. I have given it to you. THIS IS BIG BROTHER SPEAKING.

So, dont cry, just come and ride in my pocket. Going to walk into town....

"And I dont mean names like 'Princess' Phew, what self respecting parent would name a child that????!"

FUCK YOU, GUGGY! [yes, I am actually saying this out loud]
The only person allowed to hate on my parents for their appalling taste in names is me!!!!

And Princess, apart from GUG's appalling taste in names he really...oh no wait. He's just a dick. I like your name though. You won't believe how cool I thought it was when I realised Princess was actually your name!! If I could re-name myself I would, though not Princess, since that's yours. I'd be God.

I have taken a lot of crap from you, GUG.
But this time, I am actually...hurt.
And I am taking a real break from you.
Have a nice life.

lil Sis, you are angry at that??

Oh come on. Sis, lil sis? It was meant as a joke... not hitting on your parents! And of all people you should know that.

What the hell is the matter?

My weird humour got the better of me? I dont know.

And deT, I have been stepping on your toes??? Where, about the bird? and the names???? Gosh, that was weird humour.

And I will remember that not everyone has my weird sense of humour.

deT, you are deT. You are no lovely little mouse that I can carry in my pocket.
Princess, honest, your parents I didnt mean to insult.... Though I did want to poke a little fun at their little Princess.... Ok. That's it.

No, no! I loved the bird! Hell, you can name almost everything after me and I shall stand back with pride beating in my chest. Not my toes, okay so maybe my toes once or twice, but not here. Here I smirked and smiled and gloated :D

Yeah, I am no mouse, though my nose is about as pointy as one. But you may still call me Kamese, I shall bear it with amusement.

That is what I expected of you.

So, how have I been stepping on your toes?

Oh nooooothing. I was just sulking about lord knows what, cause I certainly don't. Might have been from something you said or posted or whatever. I dunno. My memory is shot to utter shite of late.