The Weather department is warning of more rains to come. That they will be heavy and tough. Lots of flooding to beware of. Lucky for me, we live on a hill. As the city has grown, has ceased to be just a ‘city built on hills’. Many people do live in the valleys, valley bottoms, and of course when it rains, the floods are terrible there. 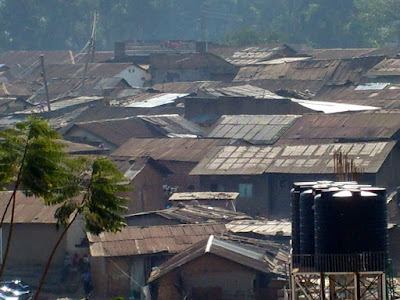 Part of the 'Bat Valley'  Slums... At least you see them from the other side of the hill. Dont flood when it rains, since it is on a bit of a hill. Katwe is much worse.


But, at the moment, the sun is out. Strong, bright, and the effect through the bright green of the leaves is golden. A magical light. Under the trees it is cool and idyllic. And, there is a sense that today, it will rain. Something in the air that promises the taps of heaven opening up later on. But the sky is blue- a brittle, bright blue.

Have been following the happenings in the . You know, Obama winning the Nobel, and the incredible venom from detractors. It is very amusing. And sad. Very sad that for political reasons, it is okay to be so hate mongering. I don’t see it as less than that. Because, well, why should I shade my eyes in the name of political correctness?

But, Obama’s star is giving us a lot of leeway. Something for which I would nominate him for the Nobel, despite his ‘thin resume’!!!!!

Yesterday he was talking to the Human Rights Campaign. Yeah, I know, the LGBT organizations in the are not happy that change is not coming so quickly. (Me, I think they are acting like children. We want our sweet now… and to hell with what else Daddy is thinking about.) So, me being an un-interested individual, I followed it, like on the periphery of my consciousness. Till, I realized that the headlines in the foreign stories on the TV and radio stations here was the big speech by Obama to ‘homosexuals’. It was repeated ad nauseas until my attention was triggered. The speech was long in coming, and we are a homophobic country. So, why so much ‘news’ in it? Well, Obama was delivering the speech. Obama is pro-gay. Obama’s star is incredibly brighter than that of Museveni, in the hearts of Ugandans. So, when Obama dares to go out and speak favorably to gay citizens in his country, it fascinates Ugandans where gays are an unmentionable pariah entity. So you see, Obama’s Nobel was very richly deserved for the many un-measurable, but distinctly happening things that are because he is who he is!

I love it that Obama being Obama works for me in , speaks for me even more than I can dare speak out for myself. Good for the guy. Fascinating.

PS; Hadnt actually noticed the lack of congruency of that particular photo. But dont feel like changing it. No doubt Princess will put it down to my irreverent sense of humour....! But this is our world, isnt it? The good and the bad, the ugly and the beautiful.

. (Me, I think they are acting like children. We want our sweet now… and to hell with what else Daddy is thinking about.)¨ Gug

I agree completely. Exactly...and I´m glad to see the Ugandan Newspapers covered Obama and his impressive and supportive pro-LGBT speech to the HRC...excellent (please be certain old sticky fingers, Henri Orombi, and the likes of him receive a copy).

I believe that one day you will understand all this. Because these are for you. I hope you will like me like this sport.
wholesale super bowl jerseys paypal
pro bowl jerseys wholesale paypal