Oh, I am not kidding. Here is his justification. First, it was the Church. Now?... Parliament, here we come!!!!!

"If you promote homosexuality, you are bringing a curse," he said. "Uganda is in the process of debating legislation against homosexuality but you need to give information to the people so that they know the behaviour that will be regulated."

He added: "We are not going to stop there, but will move to parliament to show the same film

You think I am going to stop the man of god? Surely NOT! This, is hilarious... A token protest to encourage him.
Forgive me, Christian friends. But, the wolves is sheep's clothing have to be shown for what they are.


And, do you know what? Ssempa has gotten fame. Real fame.


Bless them, but some Ugandans think Ssempa is a moron... Kill joys. They want the show to end. Go, Ssempa, go, go, go.
Icearc, I am sorry man, but... It is so interesting, the guy putting whatever in his mouth. So help me gods but I am dying with laughter. Let me see who does stop the man!!!!! 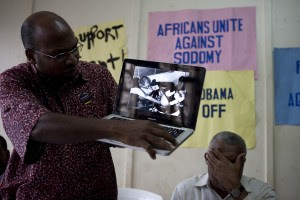 I am sorry, dear Christians. I am just amused rather than really disgusted. Let Ssempa shine in his true colours. Then, let his friends be ware...!

Posted by gayuganda at 9:33 PM

Email ThisBlogThis!Share to TwitterShare to FacebookShare to Pinterest
Labels: Ssempa

Please pastor Ssempa, please post it on the internet as well so that we can all be more informed.

I guess attendance at the good pastors church has probably doubled or trebled.

How did he come by it?

Ssempa is definately a closetted Homosexual. He is trying to hard to fight it, but in the end like many of these Pastors He will explode out of the Closet