The Baraza in Kampala, Uganda

The forum? I was there. And, I was tweeting it.

But, for reasons beyond my control, I actually failed to report on it. But, there is an excellent report here. Including one, ahem, ahem mp, who proudly said he would kill his son if he was a homosexual. Odonga Otto. Clearly a very disturbed human being. 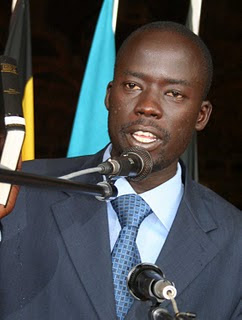 MP Odonga Otto at the forum

At a human rights forum held Friday morning in , a Ugandan Member of Parliament said he would kill his son if he discovered he was gay.


"I am baffled by the kind of hatred you spew against gay people," Mutua said, "including your desire to be a hangman. Would you apply to be a hangman if the person to be hanged were your son?"

When Odonga nodded yes, Mutua said, "There is something deeply wrong with you."

The forum, titled Human Rights and Sexual Orientation, made it clear that many Ugandans do not yet believe that homos are entitled to human rights. The country's MPs are getting set to debate a law that would impose the death penalty on people who engage in gay sex more than once.

"Human rights are not sacrosanct," Odonga said. "Private parts do not belong in the anus. We will not accept this kind of deviant behaviour in our society."

Another MP, Christopher Kibanzanga, angrily spoke out against the "vice" of homosexuality. He asked, "Who are bisexuals? What do they do? Has it just been imported into ?"


Most members of the audience — made up of about 80 students, academics, politicians and NGO leaders — appeared to be of sane mind when it comes to sexuality.

MP Christopher Kibanzanga angrily spoke out against the "vice" of homosexuality. He asked, "Who are bisexuals? What do they do? Has it just been imported into ?"(Benedicte Desrus / Sipa Press)"Anal sex is not only practiced by homosexuals but also by heterosexuals," said Rubaramira Ruranga, the director of NGENT, a local HIV/AIDS organization. He also disputed the fact that homosexuality and bisexuality are somehow un-African. "When I was young," he told the crowd, "I saw men having sex with men in my small village, out in the bush, as we went hunting."

One of the morning's other speakers, Solome Nakawesi-Kimbugwe, said that — one of the world's poorest countries — should deal with economic issues. "Let's put our priorities where our problems are," she said. "As Ugandans, what we want are laws that are relevant. Homosexuality is not a problem for us."


But it was her co-presenter, Mutua, who stole the show when he attacked the anti-gay arguments of the two politicians. (Organizers said there were a couple of other MPs in the audience, but they remained quiet.)

Mutua, the chair of 's Human Rights Commission, tore into the MPs as if he was a judge passing sentence onto criminals.

"It's important that we all try to expose ourselves to knowledge, to keep on growing," Mutua said. "People who express extremist views are, in my view, always the ones who have read the least."

The Harvard-educated lawyer went on to liken the MPs' arguments against human rights to comments made by slave owners in the American Civil War. "The kind of speech you made against gay people was the kind of speech that white segregationists were making all over . Those arguments are classic. They have been reproduced in every era by every segment of society. You didn't invent them."

Mutua went on to say he believes that countries like would be justified in holding back on foreign aid if MPs pass the anti-gay bill. "There are consequences to being a member of the international community," he said.

And, what can I say but amen to that.

I just wish more MPs were there. In the kind of calm, collected atmosphere Mutua created, divorcing it from the hate smogged outpourings of the rallies, it was instructive. Odonga Otto simply didnt have any answers. He saw it. He knew it. And he walked out.... I had predicted on twitter that he would not dare speak again....!

And, one thing. The reporter did a very good job, but to say that we homosexuals said nothing would not be really right. First, Val Kalende delivered an emotional speech.
Then, there was this lady who dared to say that she had never had an orgasm with the many men that she had slept with. And, that the first time she slept with a woman....! (I bet Ssempa would have loved to be there and film that!, Oooops!)
And, I did stand up and speak. Of course not as gug. Why should I? My closet is wide open, and it just needs a little nudge to come out and flower. But, that was not the forum....
Posted by gayuganda at 12:30 PM