Some Opinions and news

The Daily Monitor continues their assault on the bill.

And, as an independent paper, they do show their real worries. At least, that is what I think are their real concerns. We are living under a quasi democratic, dictatorial regime. Why such  a drastic law now? Why? Why is poor gug such a threat to the peace in Uganda?

Here are excerpts from the opinion piece.


This is not the reason I oppose the Bill. It is because the regime in Kampala cannot be trusted with any far reaching legislation, for its propensity to misuse laws and to the advantage of the regime and against political opponents.


The anti terrorism Bill was supported by some people in the euphoria that accompanied the 9/11 attacks on the US. Now it is apparent that the law is being selectively applied to political opponents, as a tool of intimidation. Scores of documented cases of detention in ungazetted places, also called safe houses have been perpetrated in the name of the anti-terror law. Terrorism suspects have lost their lives in extrajudicial circumstances while no successful prosecution have been conducted.


If we let this ill conceived and absurd law to pass, we should also be ready to see it selectively applied to the regime’s opponents who would be framed when it suits the regime. This is not the first time political opponents have been framed in this country. Former presidential candidate Kizza Besigye was framed for rape.


Who will bethe next opposition politician to be arrested for suspected aggravated homosexuality or suspected concealment of homosexual practices? Because homosexuality is an abomination in Uganda, the regime, when it decides to frame you, does not have to prosecute you successfully. It is enough that your name has been dragged in the mud, you have been discredited and that possibly your political career is destroyed.


I wouldn’t trust this human rights abusive regime with any far reaching law. And bedroom matters should not be the subject of legislation. I oppose this Bill. Let the priests do their job.


The Times on line of UK agree with Kalinge-Nyago. Uganda's Inhumane bill serves only one purpose. To perpetuate the Presidency of Museveni in Uganda. More repression for his opponents.

Hey, before you kill me for this act of lesse majeste, remember, I am reporting that. I am citing an article in a newspaper, in the UK. The Times Online UK.

And talk about the Church, err, coming out. It seems that the Church of Uganda at last has an opinion on the law. Here it is. An article in the Daily Monitor today


Archbishop Luke Orombi, a public critic of homosexuality, said at a press conference at Namirembe that they are drafting specific contributions to the Bill now before Parliament. “I am surprised by the global reaction to the Anti-Homosexuality Bill because it is yet a proposal on table for Ugandans to look at,” the prelate said.


Noticed the rebuke to foreigners to back off?

The government is following the same line.


The State Minister for International Affairs, Mr Oryem-Okello, in an interview with Daily Monitor on Tuesday, described as “pre-mature and wrong” the chorus of international criticism based on a Private Member’s Bill.


Oh, by the way, Stephen Langa is continuing his organising for the Bill. It is in the article above. This time he brings out 'parents for the bill'.

The Picture below is from the Wall Street Journal.
In it, Pastor Martin Ssempa is at a Muslim rally in Jinja, the second largest city in Uganda. He is the group at the podium, the one in black, holding the mike, with his hand up. He is campaigning with the muslims to pass the Anti-Homosexuality Bill No. 18 of the Parliament of Uganda.
At that particular point, he had asked all those who were in support of the Anti-Homosexuality Bill to raise up their hands. They did.
Check below. Is there anyone whose hand is not up? 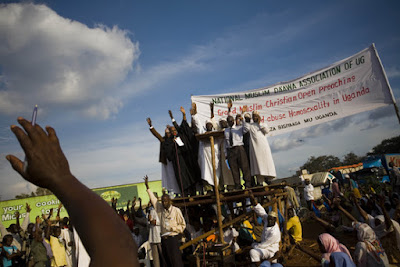 And, elsewhere, to the people who are claiming opposition against the bill outside Uganda is from 'homosexualists' as Ssempa calls them, there is this sober opinion. It is simply not. Well, Ssempa can denounce Rick Warren, but, Rick Warren is no homosexualist. At least that Ssempa has to concede. Here is the opinion piece in the Washington Post. Faith, folly...

Ugandan supporters of the bill have dismissed international criticism as liberal, cultural imperialism. The sponsor of the bill, David Bahati, accuses gay rights groups in the and of "engaging in a game of manipulation, deception and control." But Ugandans should not be deceived into thinking that criticism comes only from gay rights advocates. Republican Sen. Tom Coburn calls the law "absurd." GOP Sen. Chuck Grassley describes it as an "un-Christian and unjust proposal." Pastor Rick Warren concludes it is "unjust, extreme and un-Christian toward homosexuals." All three are right. And the prospect of pastors and counselors as informants for the state is particularly offensive -- the calling of Judas instead of Jesus.


It is not cultural imperialism to criticize an oppressive law in , any more than in or . It is consistency. And it is not colonialism for nations that donate to the fight against AIDS in to be disturbed about policies that make this effort more difficult. is on a path of self-isolation that will hurt its people.


Religious citizens often bring strong moral convictions into public life. One of those convictions should be pluralism.

My take is that, we are angering friends where we dont need to. Iran can act like Iran. Zimbabwe like Zimbabwe. For Uganda to act like, er, cousin Zimbabwe...

I do like this sober assesment from Warren Throckmonton.

However, the assistant bishop (Church of Uganda) does not seem to understand that what they do in has an impact on Christianity as a whole everywhere. In my view, this bill is a significant black eye on the church as a whole and is a stumbling block to the gospel. We must speak or violate our conscience and compromise our witness. I am ready to listen but that goes both ways.

Posted by gayuganda at 6:14 PM