The Kindness of Total Strangers...

Now, I do know that the guys came here. Actually, they contacted me. No, I was more anonymous than I am now, but, we brushed shoulders, so to say...!
The strength of some media. It has a huge circulation, or so I am given to understand. So, with the NYT in play, the story is really in the mainstream media.

And, the little people like me continue to get the story, and amaze me with their connection with me. Here is what one blogger says. It is at the Goodgoodend blog.

And because this is a sensitive subject, let me make myself clearer: I don't know how I feel about the politics of homosexuality - civil unions v. marriage, health benefits, end-of-life decisions and other rights. I know exactly how I feel about homosexuals: I love you. Period. I love you whether it's nature or nurture, whether you're still in the closet or out in the open, whether you are happy or wish every day it could be different.

And because I love you, and because you are human, I believe you deserve basic respect and rights and opportunities. I believe you are entitled to life and safety and the freedom to make your choices just like anybody else.

I think I've certainly gotten in over my head again in terms of subject matter. In short, I don't know if it's God's perfect will for anybody to be gay. I do know, however, that condemning people and threatening death is never going to be a way to show them God's love.

I think all we can do is pray, friends. For the legislators in and across who see these laws as a way to regulate disease or morality or both. For the people in those countries who are affected by these laws. And for the Christ-followers who come into contact with them every day with the opportunity to show them love and respect and compassion.

Thanks dude. You dont have to be gay, or to be into gay politics to be human. The story of the Anti-Homosexuality Bill 2009 in the Uganda Parliament (text here) touches everyone. Even me it overwhelms me. The crass stupidity of my countrymates. And, the overwhelming kindness of strangers.

Here, another blogger, who is not gay, also offers a the concentrated kind of sober call to action that mobilizes human beings. Yes, Uganda is in an anti-gay panic, an anti-gay fervour. And, the world, instead of looking on with shocked disbelief and disdain for this backwater, is coming up with a tough look and censure.

Now, the rest of us can’t get away with just saying: “not that there’s anything wrong with that.” We’re past that mere tolerance crap, and we have to stand up and fight alongside those who are being attacked in this 21st century witch hunt. Having best friends and members of my family who are gay, I couldn’t bear the thought of having them treated that way, ever. Our generation is the product of years of fighting for equal rights for people threatened by those who were in power, by those who were in disagreement with them, or by simply the majority. Instead of focusing on a New Year’s resolution based on what’s in our pantry, let’s do something about this bill.

The kindness of total strangers. Because, increadibly, they identify with what I am going through.

I kind of understand the Americans. Not Lively, and the other two Musketeers. But, the American public, human beings who find themselves responsible for something some over zealous countrymen exported. Dupes were they? Maybe not. But, fellow human beings in the US are incensed. Prosecute them, they say. For incitement to murder.

Many are not interested in the cries of 'I was duped'. Because, they were warned. Here at Box Turtle Bulletin, and here at Throckmorton's blog

When it comes to homosexuality, already has several riot inciters so the role of the Americans was to add a perception of credibility and urgency. What would really be helpful is for the three to say directly to the Ugandan people: we were wrong in what we told you. Gays didn’t cause the holocaust, they aren’t ill people who will respond to a forced cure and they aren’t the cause of all your problems. Disagree on the moral questions if that is your conviction but for the sake of Christ, do it agreeably.

Actually, it is very true that we had our riot inciters. Nsaba Buturo, Ssempa. I was always amused about what they used to say about us, and the extent of their ignorance of us. That vacuum of knowledge was filled by myths and lies, which gained the credence of truth. Yes, the three musketeers (Lively and Co.) are culpable.

Truth Wins Out is kind of tough. Savage in their denunciation. I know where they are coming from. I identify. I feel it.
So, Lively was happy that he had delivered a ‘a nuclear bomb against the gay agenda in .’ Its hard to feel sorry for him. Not me. 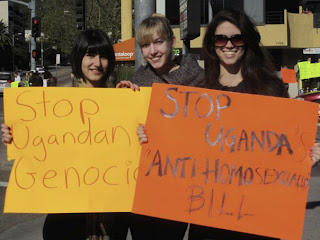 Contrast this with the Photo from the New York Times article, which is here. 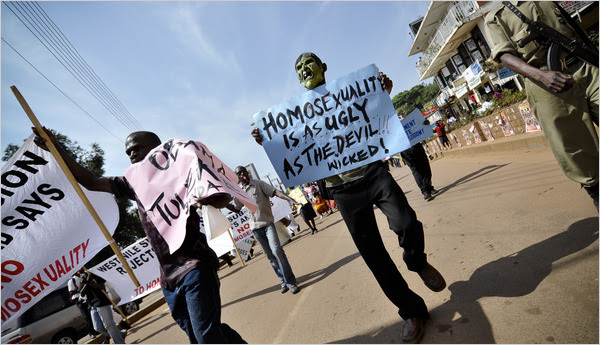 Notice the 'police protection' for the demonstrators? Oh no, they didnt need it. Not at all. But, nice having it in the picture.
Think we would get protection if we counter demonstrated? Of course not...!

Yes, he is a born again Christian. Is Minister Nsaba-Buturo.

has a rich history of being mind-fucked by Evangelical Christians, so it should come as little surprise to learn that their fervor for Christian Orthodoxy has dribbled into their legislative system. Although many citizens fail to act on their homophobic feelings (with exception) apparently has missed the memo on that bit.

That is from here.

Bad press for Uganda? Ask me whether I care. I am Ugandan. I love the country. The people are my people. But, they have crossed the line when in stupidity they try to kill me. Sorry, I am also a human being. Just like they are.

No, you are not too angry, and not nearly as angry as I am about the role of the U.S. Christian Right in this scandal.

Do you know about "The Family?" It's a now-not-so-secret right wing lobby in Washington D.C.

I somehow missed the following Fresh Air NPR interview that revealed a connection between The Family and the Ugandan officials that you keep naming: http://www.npr.org/templates/transcript/transcript.php?storyId=120746516

"David Bahati, the man behind this legislation, is really deeply, deeply involved in The Family's work in Uganda, that the ethics minister of Uganda, Museveni's kind of right-hand man, a guy named Nsaba Buturo, is also helping to organize The Family's National Prayer Breakfast. And here's a guy who has been the main force for this Anti-Homosexuality Act in Uganda's executive office and has been very vocal about what he's doing, in a rather extreme and hateful way. But these guys are not so much under the influence of The Family. They are, in Uganda, The Family."

Several U.S. officials belonging to The Family -- most notably John Ensign and Mark Sanford -- were embattled in sexual scandals this last year.

The Family's theology is that Jesus shouldn't have bothered with the poor but that God's work is catering to the very wealthy. They believe in Christian Capitalism, and that translates into dividing populations based on their differences to distract from their own abuses of power and greed.

There is hypocrisy behind Ssempa and company blaming European and Western influence for the presence of homosexuality in their country (as if our orientation is a choice).

It's becoming apparent that Uganda's political and religious leaders themselves have gotten very rich and powerful by being tools of their U.S. religious corporations (let's just call them what they are).

The money they are taking from these groups for attempting a genocidal agenda would be better spent on feeding the hungry and healing the sick.

That said, your anger is justified.

I've been wondering whether Yoweri Museveni was a religious man before there was foreign money in it. I believe I have read that he was not, and I know this is true of Rwanda's Kagame.

gug: You are not now, nor have you ever been, too angry. In fact, you have consistently been so cool that I sometimes wondered if you were really aware of the situation's urgency.

And now that the NY Times has the story on the world's stage, I expect Ssempa will be as livid, if not more so, than when he reacted to Rick Warren's 'betrayal'. What a buffoon, or, as Bugs Bunny would have said: What a maroon!!

So now, If Richard Cohen's anti-gay industry is to grow, he will have to add a chapter to the 4th edition of his book, "Coming Out Straight": How to get egg off your face.

He can go to Ssempa's demonstration on the 19th and open a booth on the off-chance that he doesn't get the boot.

What an incredible turn of events!!!

Now what are the chances that this government will topple in favour of another who will be preoccupied with defending the human rights of its minority groups instead of swallowing the gospel of American religious nutters hook, line and sinker?? But frankly, the opposition parties barelt said a word to impress me or to encoutage you during this insanity.

Actually, real social problems, like the whereabouts of the $200 milion destined for medical aid, can now resurface and the culprits brought to justice, preferable at the Hague.

Finally, thanks for taking a minute to visit us at PinkNews, gug. Your comments about why fleeing the country was not an option has taught us a valuable lesson.