In one of our chats, a Kenyan friend came out swinging. They are hitting out at us. Why are we not hitting back.

Hold on, I said. That is not strategic. Whimp, was the others unspoken reply.

Then, another, a Ugandan, also came out swinging in an unrelated conversation. Why are we always defending ourselves. We can go out burning in glory.
The sudden ire was contagious. Someone else calmed down that situation.

But, my thought was, push a man against a wall, and you may be suprised at their reaction.

Me too. I am kind of tired being given all the nice, well ordered reasons on why I do not belong. There are a thousand and one. Beginning from some venerable books, which in a pique I threw overboard. Someone sent me this statement.
http://en.wikipedia.org/wiki/Lynn_Lavner


"There are 6 admonishments in the Bible concerning homosexual activity and our enemies are always throwing them up to us usually in a vicious way and very much out of context. What they don't want us to remember is that there are 362 admonishments in the Bible concerning heterosexual activity. I don't mean to imply by this that God doesn't love straight people, only that they seem to require a great deal more supervision."

A laugh. Of course [amused], straight people need much more supervision. We kind of know where all the bits and pieces are. So [dont] the straight, if you understand what I mean...!
---

To the Church, the Episcopal Church in America. Kudos! 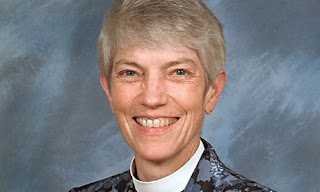 That lady, the Rt. Rev Mary Glasspool, has become the first. No, the second, openly gay person to become a Bishop of the Church. Pic from the Guardian.
From all my rumblings on this blog, it is quite clear to me that I do not trust the church. No, I dont.
But, I realise that, for some reason that I cannot fathom, many of us gay people are attracted to church and faith and religion. But, we have had to live a life of hiding. Kudos to people who are willing to accept us for what we are. Kudos, Madame Bishop. You make us proud, you and Robinson.
I am a Ugandan. We Africans, with our tribes, are born and steeped in the territorialism of ethnic and other identity. But, I rebel against that kind of thinking. Glasspool will forever be known as the Lesbian Bishop. Robinson is the Gay Bishop. So be it.
I am not happy with the stereotyping, the blinding, the sight of nothing of the person but their sexuality. But, I am quite happy that, with the election of bishops as it is, that fellow 'straight' counterparts took other than her sexuality into consideration, and rejected narrow mindedness. Because, that is what it is.
Kudos, to the Episcopal Church of America. Because, that decision was great. Ask the Archbishop of Canterbury. He has failed to make that decision. On the humanity of Gay and Lesbian people.
Dr. Rowan Williams. The ball is in your court. Literally.
Tough, not so? My opinion.
---
Now, about gay people who bash gay people. Especially in politics. Someone takes a hard and tough look at that. Of course, it is hypocrisy of the worst kind. Take this Senator who said

His votes, explained Ashburn, reflected his “duty to represent my constituents,” the vast majority of whom, in his opinion, were against various rights for gays. Left unasked and unanswered was the natural follow-up: at what point does catering to a presumably bigoted constituency (particularly by one who belongs to a group that is the object of that bigotry) become not just hypocritical but downright immoral? The question, of course, is not just one for Ashburn, but for politicians everywhere who seek political gain from advocating discrimination.

Dah. And cowardice. A cowardice I must admit to knowing all too well. But, cowardice all the same. The last thing that I will do is to betray myself. Because, if I do that, then what the hell am I doing for anyone else?
There is more about Dr. Sylvia Tamale... but, if I bring it here, then what will you read there?

Courage is one tough thing. I am appreciating, more and more, how we all do lack courage. In a huge way.

In Uganda, the Baganda are simmering, simmering, simmering. Nothing highlighted that as much as their impotence when the Royal Tombs were torched. And then the central government comes in with people shooting the mourners. I wonder at how people think. For the last few months, the Central government has been in a war of egos, fighting against a particular ethnic group. How could they even dream of being able to reverse that at the burning of a cultural relic?

I will not fail to ask again. Doesnt anyone in government have a cell of sense left?!

And, from one of the Cabinet ministers. Someone keeps touching my thigh....!

LOL sorry but I think it is really funny, check out the lady on front row with her hands on her head, she is probably saying "mama yaye woowii!" Jesus Christ, ashindwe and other things, he has (Ssempa) just taken a cup him and his audience

What do you think of this (sorry, have forgotten how to do a link):http://www.rightwingwatch.org/content/lesbian-bishops-get-africans-killed

The IRD is about as far away from an "objective source" as one can get, but even so I would be interested in hearing what you think of this. Thanks.

That defies my poor logic. So, the election of a Lesbian bishop in the US leads to the killing in Jos, Nigeria.

The logic is flawed, and, matter of fact, the violence in Jos is an ongoing thing. For years. Very few of us in Uganda, or Africa, actually care about a gay or lesbian bishop in the US.

It is used as a scare tactic by the likes of Ssempa. But, it is just more moral bankruptcy to clothe their hate in lies and misrepresentations.

It sounds ridiculous on this side of the Atlantic, but that is not the side that counts for this one.