Am recovering from last night. Sadly, I am also at work...! Sometimes the guilty are punished multiple times.
Yesterday was Eid day. A public holiday. And, well, we went out. And, I went dancing, while he kind of disagreed with my schedule. So, since it was my schedule, I went ahead to act stupidly.... Only excuse is that I am also human. Oh well, we live and learn. Again.
Now, the head seems sort of light, and I am in need of water, and some extra hours in bed. But, I have to soldier through the day.
To our running topic...
I have to say that I still expect the bill to be passed. We have about one chance in 100 to have it stopped. Or stalled. And, how can we achieve that? International condemnation. Pressure on the religious heads who dare to advocate genocide. And, if the Ugandan medics dare come out and take a stand. The latter is almost impossible to achieve. They are also homophobic. It is an unpopular topic. Bet they dont even know that they have a part to play! ha ha ha ha!


Canada has taken on the political mantle of pushing the international condemnation of the bill. Good for them. What I dislike about politics is when, for some reason or another, countries fail to do the right thing. Or have to be pushed, and pulled. Because of 'politics'. Canada's Prime Minister condemned it. [Satirical piece says they actually plagiarised the US statement...! Hilarious.] 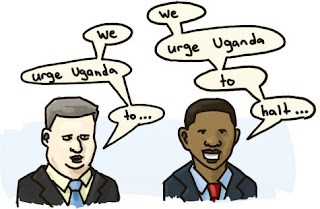 (pic from Slap Upside the Head)

But, debate in the Canadian Parliament, from both parties condemns Bahati's 'nice piece of legislation'. And, at the Commonwealth, both Brown of Britain, and Harper of Canada have apparently raised the question with Museveni. I like the diplomatic language, the diplomatic shuffling. And, of course, Museveni is playing the deniability card. It is a private members bill...! Who will take any bets on Museveni not supporting it? I will take your money for free.

The Church of England continues its silence. Well, Christians are continuing their pressure. You know what, it will be ridiculous when at last they speak out! They are not politicians to parse language. Even the politicians are speaking out, now. Ironic, isnt it?

What has amused me is that someone has at long last noted the silence of the Catholic Church. It is DEAFENING! The Church of Uganda is playing politics. Hypocrites. Yeah, they are hypocrites. They told us their stand, withdrew it, and are now trying to play innocent in the sight of the world. Hypocrites. Well, sue me. Dont I have the right to call a piece of turd turd?
And, here is more of the same. Someone blames the west. Of course. I am an African. A Ugandan. And, that piece of turd stinks, to high heavens. It went out of fashion long before it was even correct. Blame the west. Blame them for wanting to kill me... (Or, maybe for having the money to force cultural wars on Uganda?) Either way, it is much the same. Let us blame foreigners. Of course, for us, we are noble savages. Innocent. Guiltless. Oh, here is the link. A pentecostal, and really laying the butter on Lively.
Yet, curiously, it also shows that the pentecostals are feeling the heat. They are not defending their 'nice bit of legislation'!
Speaking like this sinner, who is about to be squashed by the might of the state, and church... all in the name of morality, isnt it funny that I am calling out on the morals of the Church to be questioned? And, I am.... Hypocrisy can be attacked. Especially when I lose nothing, showing that they are hypocrites. And, I will lose everything, because they will not speak out.
So, where goes this from here?
Pressure. Continue the pressure. Of course, we are applying it here, as we can. And, though there are only glimmers of reaction, it is a matter of fact that even insular Uganda is noticing that there are somethings wrong with this bill.
Kind of makes me feel liberated. Not having to kow-tow to the politically correct speech that has to characterise everything.
Now, I look out, and the haze over Kampala is still there. But, the sun's brightness is fighting through.
And, I think I have really woken up, what with reading through all that material.
Have a good day

GWE FUCK YOU, STOP YOUR GAY SHIT. GET A LIFE. YOU UNNATURAL FATHERFUCKER

Let's just ignore the hater here. What's a "private member's bill"? Does this mean that a citizen rather than an elected legislator put it forward?

A private member bill is one that is written and presented by a member of parliament.

Apparently, this one must have been written in America... But, it was presented by a member of the Uganda parliament, following the usual procedures.

I hear, the govt wanted to be able to tell the International community that, no, they were not the ones who presented the bill. That this was a democracy, and the Member of parliament was exercising his democratic right... So, maybe the Minister of Ethics and Integrity overplayed his hand?

What I know is that, our definition of democracy should always be taken with a 'pinch of salt'....