Just caught up this, that the Archbishop of York, the number 2 in the Church of England is not going to comment on the Anti-Homosexuality bill.

Yeah, the guy was born in Uganda. And, forgive the gentleman, he has some more than veiled interest in what is happening! I mean, remove the fact that he is the number 2 to Canterbury. And, he is Ugandan... by birth. Grew up here. Went into the diaspora during the Amin times. 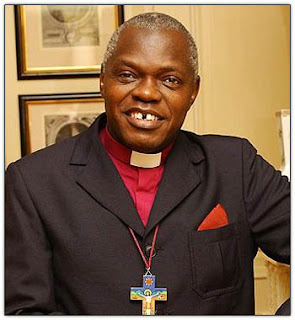 He is also brother to Pastor Robert Kayanja. Yeah, he is brother to the pastor that Ssempa was accusing of being gay in the Pastor Wars.

Pastor Kayanja is very, very strong. His is 'Rubaga Miracle Cathedral'... and it is a mega church. He has recently opened a TV station in Uganda. Christian. And his ministry spans the earth. Yes, it does. He has good connections with the First Family, and has given of his accumulating wealth, judiciously. I mean, he has been giving to the police. Gifts of appreciation.

Want to know more officially? Visit his site. Robert Kayanja Ministries. And, he is a rugs to riches story. Recently, he caused a lot of envy in Uganda, talking about buying himself a personal jet. For the Lord's Work, of course.

Fast forward to 2009. And, Pastor Ssempa, and a group of other anti-gay pastors start THE crusade. To wipe out homosexuality from Uganda.
They were going very, very strong. Until they started a witch-hunt. First was a Catholic Priest, Father Musaala. I think his reputation and singing career has been effectively destroyed. Oh, the charge of homosexuality in Uganda is impossible to shake.

Father Musaala was small potatoes. He was destroyed. True!

Then, the big guns, emboldened, took aim and started shooting. Straight at Pastor Robert Kayanja. So started the Pastor Wars. And they were very interesting. Cant detail the twists and turns. You will have to read about them here.

End result, the police exhonerated Pastor Kayanja, who continues his ministry. The other pastors are in court, for defamation, and other things.... Yeah, they actually are alleged to have given money to some young men to accuse Kayanja of having been gay.

The same Kayanja who is brother to Archbishop of York Sentamu.

Ssentamu is known for being outspoken. But, he has declined to wade into this fire....! Have to say I dont envy his position. No comment, is the comment from him!

I don´t know...he´s got a very good view of the ¨situation on the ground¨ in Uganda...I consider it a sin of omission that he remains commentless when he KNOWS right from wrong, up from down (with the chillingly ugly anti-lgbt law)...he is no brave man in my book when he ignores the challenge of PASTORAL DIRECTION in favor of a silence, no matter how potentially embarassing, that WILL, in fact, equal death!

He ought be ashamed he doesn´t SPEAK UP even if his brother had been guilty of a sexual indiscretion...what would you call that kind of a coverup from a important clergy person...a Pope? Yep, a Bishop, Cardinal or Pope.

Unfortunately, Dr. Rowan Williams is the Archbishop of Can´t-a-bury! His moral authority ran aground near Isola d'Elba, but he´s determined to end up on Saint Helena where they at least speak English and maybe someone will finally understand him.